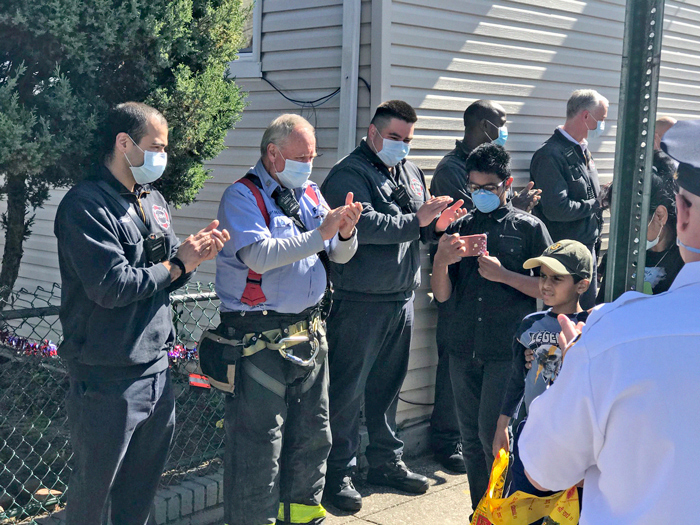 Jayden Hardowar, 8, receives applause from first responders as he returns to his Richmond Hill home after a two-week hospital stay.

The same first responders who saved the boy’s life on April 29 were there on Tuesday to applaud his triumphant return home.

Firefighter Tony Gonzalez, a member of Engine Co. 294, was part of the team of Bravest and Finest who helped bring Jayden back from the brink of certain death after responding to a call of pediatric cardiac arrest two weeks prior to Tuesday’s celebration.

“When we arrived, the 102nd Precinct was on scene. We started rescue breaths and took over CPR [from the cops],” the Woodhaven smoke-eater recounted.“We hooked him up to the automated external defibrillator and a shock was advised. So we yelled ‘clear!’ and gave the shock. That’s when we got some activity. We continued rescue breathing until paramedics from Jamaica Hospital arrived on scene. Everything worked out. It’s a good thing to see after all the death we have seen the past few months. We’re all in this together and taking care of each other. It’s teamwork, we’re all building off each other.”

“I have an 8-year-old daughter,” he said. “To see this young patient and knowing they’ll be OK is a happy story. It’s very moving. This is our job. We’re here to help and we’re here to make a difference.”