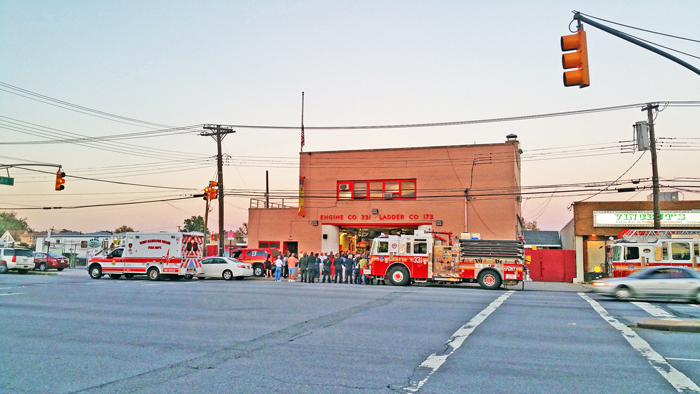 Members of FDNY Engine Co. 331/Ladder Co. 173 on Monday rescued a kayaker whose craft had overturned in Jamaica Bay.

Area firefighters on Monday morning rescued a kayaker whose craft had overturned in the waters of Jamaica Bay near the North Channel Bridge.

According to the Fire Department, members of Engine Co. 331, were flagged down by a civilian “who saw someone in a kayak struggling in the water.”

“When we arrived on scene, we were trying to scan the water with binoculars to see if we could see anyone in the water. It’s an open area of the bay with a lot of kayakers and fishermen that go out, so it’s a fairly large area where we were trying to find if someone was in trouble,” said Lt. John-Paul McCloskey, assigned to Ladder Co. 173, which is quartered with Engine 331 on Cross Bay Boulevard in Howard Beach. “[Engine 331] radioed us to confirm the location and we proceeded to them. Firefighter Dmitriy Teplitskiy went to the water’s edge and saw an overturned kayak with an individual clinging to the side of the kayak. It was partially submerged and the person looked very tired. There was a pretty moderate current pulling the person away. Firefighter Teplitskiy was tethered with a rope and got into the water. He swam out to the kayaker. He was able to secure the person and the kayak in one motion. He gave the signal and he was pulled in. Once the kayaker was back on shore, Engine331 did a patient assessment. The individual was very grateful and uninjured.”