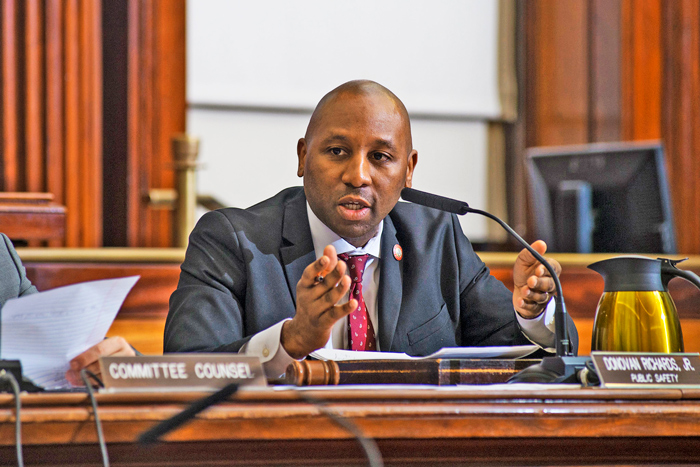 “This isn’t a moment. It’s a movement and we cannot lose sight of that,” Councilman Richards said.

Members of the City Council Committee on Public Safety on Tuesday held a hearing on a package of legislation to address police misconduct.

Introduction 536 would make use of chokeholds a misdemeanor. This bill will be amended to include other deadly techniques, like placing a knee on a person’s neck.

“Hundreds of thousands of New Yorkers have taken to the streets to protest racist law enforcement and police brutality, and to demand action from their government—action that we are finally taking to criminalize police officer chokeholds, in the memory of Eric Garner, George Floyd, and every victim of police violence,” said Councilman Rory Lancman (D-Hillcrest), the bill’s sponsor.

Intro. 1309 was first heard in 2019, but will be amended to call for the NYPD to create clear guidelines for police discipline. These guidelines, known as a disciplinary matrix, would be made public, giving all New Yorkers a better understanding of potential penalties for police misconduct. These systems are used in major police departments across the country to increase confidence in officers.

“Today, we are sending a clear message that courtesy, professionalism and respect should not just be a slogan,” said Councilman Donovan Richards (D-Laurelton), chairman of the Committee on Public Safety, and sponsor of the measure. “During a time when we are rightfully outraged about the wrongful deaths of George Floyd and other Black Americans, we need to ensure that the police officers charged to protect us aren’t encroaching on our civil liberties to protest that. We also need to ensure that officers aren’t violating their own directives to preserve peace, protect the people, and reduce fear. This isn’t a moment. It’s a movement and we cannot lose sight of that. I commend Speaker [Corey] Johnson and my colleagues for enacting tangible pieces of legislation that protect Black lives.”

The committee also considered three resolutions: Res. 750, by Public Advocate Jumaane Williams, supports State legislation that would repeal the law that currently shields police officers’ disciplinary records from being released to the public, commonly known as 50-a.

Preconsidered Res., By Councilwoman Carlina Rivera (D-Manhattan), calls on Congress to pass legislation introduced by Rep. Hakeem Jeffries (D-Queens and Brooklyn) that would make the use of a chokehold by a police officer unlawful under the federal civil rights laws.

And the committee considered Res. 27, sponsored by Councilman Fernando Cabrera (D-Bronx), which would call on the State to ban chokeholds and create the crime of strangulation in the first degree, would criminalize the use of a chokehold when a person disregards a ban on the practice by their employer.

“We can’t let this moment pass, the same way we’ve done over and over and over,” Council Speaker Corey Johnson said Tuesday. “We need to confront why nothing has really changed. After Trayvon Martin, after Eric Garner, after Freddie Gray, after Philando Castile, after Tamir Rice, after Sandra Bland, after Layleen Polanco, after Breonna Taylor. It shouldn’t have taken the video of another murder of a black man at the hands of police or a pandemic where racist and segregationist policies are directly responsible for the high death toll in black and brown communities.”