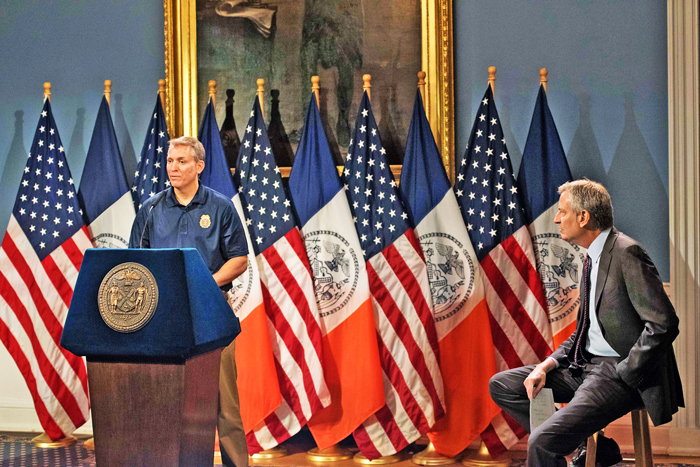 City Comptroller Scott Stringer on Thursday fired off a letter to Mayor Bill de Blasio calling on the City to cut $1.1 billion from the City Police Department over the next four fiscal years, shifting both responsibilities and dollars away from the NYPD and toward vulnerable communities most impacted by police violence and structural racism.

Stringer unveiled a specific proposal to implement a 5-percent cut to the NYPD’s Fiscal Year 2021 Executive Budget by reducing uniformed headcount through attrition, cutting overtime, and trimming Other Than Personnel Services—saving approximately $265 million annually. By doing so, the City could free up that funding to support critical frontline services, rebuild communities ravaged by COVID-19 and systemic community disinvestment, and dramatically reduce police interactions that too often end in unnecessary criminal legal system involvement.

Stringer’s proposed cuts would save roughly $265 million annually, representing a reduction (or PEG) of 5 percent in FY 2021. Over four years, the plan would net the City nearly $1.1 billion in accrued savings that could be redirected to other priorities, including helping the city to stave off cuts to other essential services. 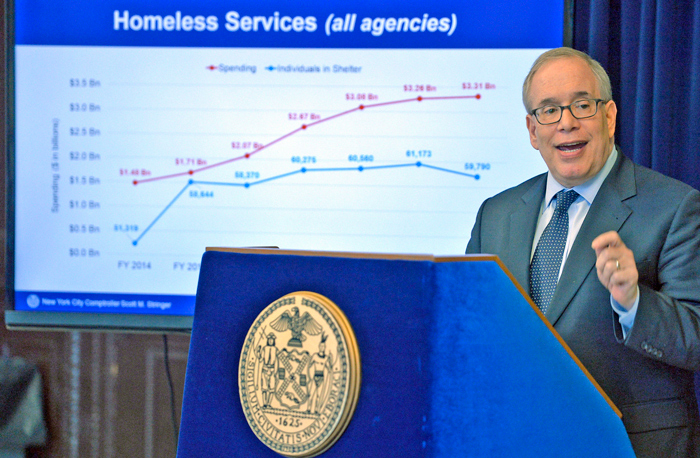 Photo Courtesy of Susan Watts/NYC Comptroller’s Office
According to Comptroller Stringer, his plan would net the City nearly $1.1 billion in accrued savings that could be redirected to other priorities, including helping the city to stave off cuts to other essential services.

On Sunday, Hizzoner answered. De Blasio announced a series of new reforms to the City Police Department to strengthen trust between New Yorkers and officers. The City will shift funding from the NYPD to youth and social services for communities of color, move vendor enforcement out of the NYPD, and establish a community ambassadors program within the NYPD.

As Hizzoner noted, the State Legislature voted to approve a package of bills that looks to improve community relations with the NYPD, properly discipline unscrupulous law enforcement agents, while protecting those who do their policing correctly.

With tensions rising in the country, and protests taking place across the state, New York is taking action to improve police/community relations and transparency by approving a list of bills that addresses issues such as false 911 complaints, banning the chokehold, creating a law enforcement misconduct investigative office, increasing the amount of information the chief administrator of the courts must compile on misdemeanor offenses and violations, repealing Section 50a of the Civil Rights Law, while codifying protection of an officer’s personal information, recording of a police incident, the right for medical attention, additional reporting for the discharge of a law enforcement weapon and body cameras for State Police.

“After much negotiating, research and discussion, I decided to vote in favor of this legislative package because it increases transparency amongst governmental agencies, improves public safety relations with the community, reveals the disciplinary records of law enforcement agents who are properly investigated for misconduct, while still protecting personal information of officers,” State Sen. Joe Addabbo , Jr. (D-Howard Beach) said. “This will help appropriately safeguard the records of the majority of law enforcement officers who do a credible job, in addition to identifying those officers who do not adhere to regulations. Whenever we can accurately inform the public and protect good public servants, everyone benefits.

“I have always respected those individuals who choose a path of civil service by validly putting their lives on the line for the safety of others,” Addabbo added.“When the police and the community work together, it produces positive results that can create true public trust and safety. I’ve seen it done across my district time and time again through full and honest communication between the police department, community groups and residents. However, just because situations are good in some precincts, does not mean they can’t be better citywide and statewide. I believe this package of bills will further improve the relationship people have with law enforcement across the state and increase the confidence individuals should have in those who serve to protect us.”