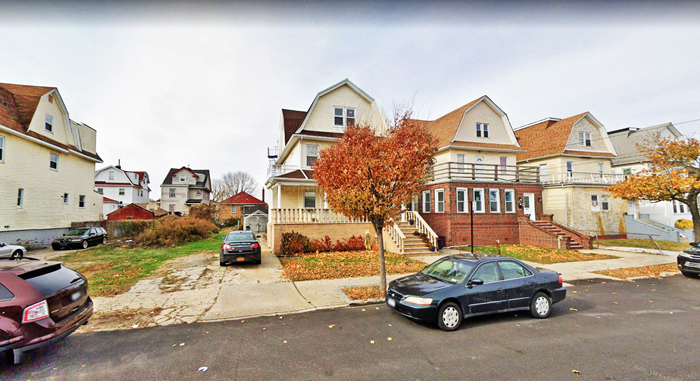 The two cops were sitting in their marked patrol vehicle on the night of May 31 on this Far Rockaway block when the car was lit up by live rounds.

The NYPD cops stated that they heard the shots just before the radio motor patrol vehicle was jolted by bullets that ripped into the side and rear panel.

Kane Motta, 21, who is known to reside on Elizabeth Avenue in Arverne, as well as on Ayers Road in Sandyston, N.J., was arraigned last Tuesday night on a complaint charging him with multiple counts of first-degree attempted murder, attempted assault in the first degree, criminal possession of a weapon in the second degree and second-degree assault. Motta was remanded into custody and ordered to return to court on July 2.

According to the charges, shortly after 11:30 p.m. on Sunday, May 31, Police Officers Fawad Khan and Mark Beneducci sat in a marked patrol car on Beach 66th Street in Far Rockaway. The RMP was parked with its lights flashing when both cops heard a loud popping sound and felt the vehicle rock suddenly. Upon exiting the car, both officers observed several bullet holes on the driver’s side at the rear of the car’s storage area and the tailgate.

According to the charges, video surveillance of the area showed Motta—who lives an eight-minute walk from where the police car was parked—in the vicinity at 11:27 p.m. Motta is allegedly observed on the recording climbing over a fence on Beach 66th Street to get into a backyard where he allegedly hid a gun in the wheel well of a parked car at the rear of the driveway.

Moments later, according to the charges, said District Attorney Katz, Motta is observed on the same recording wandering in the area, then allegedly retrieving the firearm from the parked car’s wheel well, walking down the driveway, then back toward a lot next door where there is a clear sightline to the parked NYPD car. Gunfire suddenly erupts and the defendant runs from away from the scene immediately afterwards. Police later recovered spent shell cases from the lot.

Both Khan and Beneducci sustained ringing in their ears and some hearing loss as a result of the shooting, Katz noted.

“Thankfully, neither of these officers was struck by the bullets that were fired at them,” Katz added. “While we are living through very tumultuous times with demonstrators clashing with police in the streets, this incident was not a protest. This was a targeted attack on our law enforcement as they watched over a neighborhood on a quiet night in Queens. This vile act of gun violence is unacceptable and will not be tolerated. The defendant has been apprehended and will be prosecuted.”