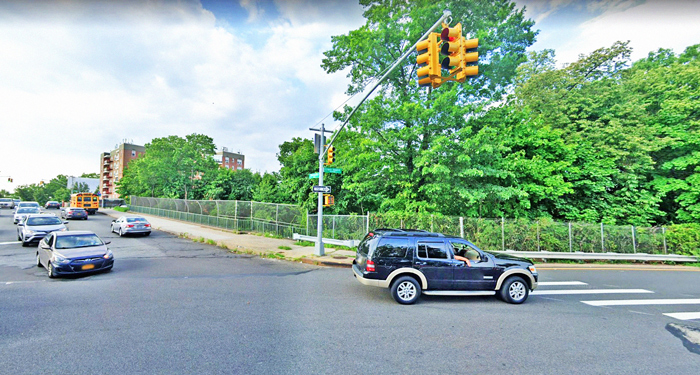 The wild attack occurred at the intersection of Clintonville Street and the Cross Island Parkway service road in Whitestone.

A Whitestone man who was allegedly observed on viral videos attacking peaceful demonstrators last Tuesday afternoon in his neighborhood has turned himself in to authorities, Queens District Attorney Melinda Katz announced Thursday.

The nonviolent gathering of Black Lives Matter protesters on a Cross Island Parkway overpass turned into a frenzied scene when Frank Cavalluzzi, 54,allegedly hopped out of his vehicle and chaseddemonstrators while wearing a glove infused with four long, serrated blades. Cavalluzzi then allegedly got back behind the wheel of his SUV and mounted the sidewalk, nearly running down the marchers.

According to the charges, at approximately 3:45 p.m., on June 2, at the intersection of Clintonville Street and the Cross Island Parkway service road, a group of approximately a dozen peaceful demonstrators held up signs and posters calling for justice in the death of George Floyd. The defendant was one of the many drivers to pass by the demonstration. Cavalluzzi, however, began yelling at the protesters. Then, he pulled over, got out of the SUV while wearing a device harnessed at his wrist with four serrated blades protruding from a glove. Cavalluzzi allegedly began chasing a young man in a threatening manner with the knives and shouted in anger at him.

Continuing, according to the complaint, Cavalluzzi allegedly rushed toward others on the overpass threatening them with the multi-bladed weapon. He allegedly yelled out to the demonstrators, “I will kill you” just prior to driving onto the sidewalk and accelerating toward them.

According to the complaint, Cavalluzziallegedly revved the engine and maneuvered to go between a fence and street light pole, apparently aiming to run down the protesters. The crowd of demonstrators quickly disbursed,fleeing in all directions to get away from the wild driver.

After videos of the incident clearly showing Cavalluzzi’s license plate were shared on social media, police began to conduct an investigation. Cavalluzzi surrendered himself to police Thursday morning at the NYPD’s 109th Precinct in Flushing, Katz said.

“In a burst of anger and rage, this defendant allegedly sought to kill protesters who were peacefully assembled and exercising their right to free speech. No one at any time should infringe upon another’s constitutionally-protected freedoms and doing so with the intent to injure and maim is criminal. It is amazing that no one was injured in the melee,” Katz added.“The defendant is in custody and will be prosecuted to the fullest extent of the law.”

If convicted, Cavalluzzi faces up to 25 years in prison.