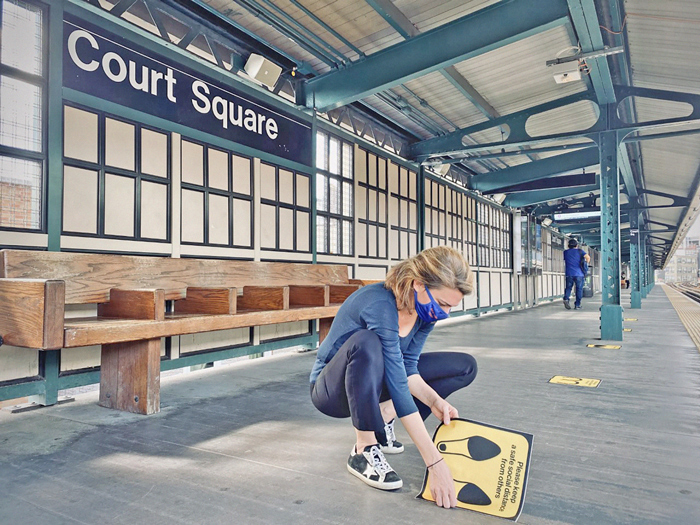 The Metropolitan Transportation Authority on Friday unveiled its 13-Point Action Plan for a Safe Return as the five boroughs begin Phase 1 reopening this week.

Since dropping more than 90 percent systemwide, ridership has started to return in advance of Phase 1, with subways and buses seeing 213,548 more riders on Monday, June 8 compared to the prior week. June 8 marked the first time that subway ridership reached 800,000 since before the pandemic began. Ridership was at 800,664, compared to 686,869 on Monday, June 1. Subways saw 15 percent of regular ridership compared to one year ago. Ridership was at its highest during afternoon peak hours, specifically from 3 p.m. to 6 p.m. Manhattan, which had seen the largest decline, saw a 20-percent increase in ridership compared to the week before.

Since May 1, NYC Transit has seen gradual increases in ridership, which has grown to more than 700,000 weekday subway riders and 700,000 bus riders to date. To accommodate those riders, subways will return to regular weekday service (except for the continuing closure of the system between 1 a.m. and 5 a.m. for cleaning), buses will return to regular weekday/closed school service in Brooklyn, The Bronx, Queens, and Staten Island and buses will go to 75 percent service in Manhattan on Monday, June 8. Express bus service will be restored.

NYC Transit employees, NYPD, MTA Police and contract security will be stationed on platforms to assist with crowd control, but we need help from our riders. That includes waiting for the next train or bus if one is too crowded, or walking to a different car.

MTA will continue rear-door boarding on buses until further notice, and has eliminated cash transactions at railroads to prevent person-to-person contact to ensure the safety of operating employees.

Customers will continue to be limited to no more than one hour in a station, must leave the train and station at the end of the line. Shopping carts are not permitted in stations or on trains.

The LIRR will conduct platform and terminal oversight to control crowding, and increased personnel at key locations on platforms and in terminals will monitor ridership, assist with loading, and provide customer information.

Metro-North will continue its no-in-person-cash sales policy, with cash sales available only at ticket vending machines.

In other public transportation news, Mayor Bill de Blasio on Monday announced nine major bus lane projects. The new busways and dedicated bus lanes will increase bus speeds and reliability along major corridors in all five boroughs and address concerns over the growth in vehicular traffic, according to Hizzoner.

Of the nine major projects, which will benefit nearly 750,000 daily riders, three are in Queens. Beginning this month, the City Department of Transportation will add a busway to a 0.3-mile northbound stretch of Main Street, where it meets the terminus of the 7 train. The street currently features bus and truck priority treatments in the southbound direction that have resulted in a 23-percent increase in bus speeds between 2017 and 2018. The enhancement will run along Main Street and Kissena Boulevard as it connects to Main Street and will continue to Northern Boulevard. Bus routes that travel along Main Street carry about 150,000 rides per day, according to the City.

City DOT has planned a busway to a 0.9-mile stretch of Jamaica Avenue between Sutphin Boulevard and 168th Street; this accounts for 225,000 daily rides.

Additionally, the City will install a bus lane on a 6.4-mile stretch of Merrick Boulevard from Hillside Avenue to Springfield Boulevard.

“As our communities continue to recover from their battle with COVID-19, I am pleased to know improvements are coming to Southeast Queens,” said Assemblywoman Alicia Hyndman (D-Springfield Gardens). “Well known as a transportation desert, our busy hubs of Merrick Boulevard and Jamaica Avenue carry our community to and from home. I look forward to working together to increase the reliable service in the area.”

Nick Sifuentes, executive director of Tri-State Transportation Campaign, added, “This is an incredibly important step forward to improving bus service for hundreds of thousands of riders. During the height of the coronavirus pandemic, even as most New Yorkers sheltered in place, we saw buses crowded with essential workers traveling to and from hospitals, warehouses, grocery stores, and other critical services that allowed us all to stay home and stay safe. We owe it to them to keep buses moving quickly, and bus lanes are the most important part of improving bus service and reducing crowding. And as millions of New Yorkers start returning to work, we cannot cram more cars onto our already congested streets. Making bus service more efficient will make buses safer, reducing crowding and allowing us all to better physically distance on transit.”