“These are issues that the country has been talking about for a long time, and these nation-leading reforms will make long overdue changes to our policing and criminal justice systems while helping to restore community confidence in law enforcement,” said Gov. Cuomo.

Following the killing of George Floyd in Minneapolis and an ongoing pattern of police brutality against minority communities across the nation, Gov. Andrew Cuomo on Friday signed the “Say Their Name” Agenda package, featuring four reforms: allowing for transparency of prior disciplinary records of law enforcement officers by repealing 50-a of the civil rights law; banning chokeholds by law enforcement officers; prohibiting false race-based 911 reports; and designating the State attorney general as an independent prosecutor for matters relating to the civilian deaths.

“The murder of George Floyd was just the tipping point of the systemic injustice and discrimination that has been going on in our nation for decades, if not centuries,” Cuomo said. “These are issues that the country has been talking about for a long time, and these nation-leading reforms will make long overdue changes to our policing and criminal justice systems while helping to restore community confidence in law enforcement. I want to applaud Senate Leader [Andrea] Stewart-Cousins and [Assembly] Speaker [Carl] Heastie and the bill sponsors for working through these tough issues and for their fast action. New York State is the progressive capital. We never sit back and say just what the nation should do—we show the nation what it should do, and we did that again today.”

In 1993, the City Police Department completely banned its officers from using chokeholds, but the ban has not prevented police officers from using this method to restrain individuals whom they are trying to arrest and the continued use of chokeholds has resulted in too many deaths. The new law creates criminal penalties when a police officer or peace officer uses a chokehold or similar restraint and causes serious physical injury or death. 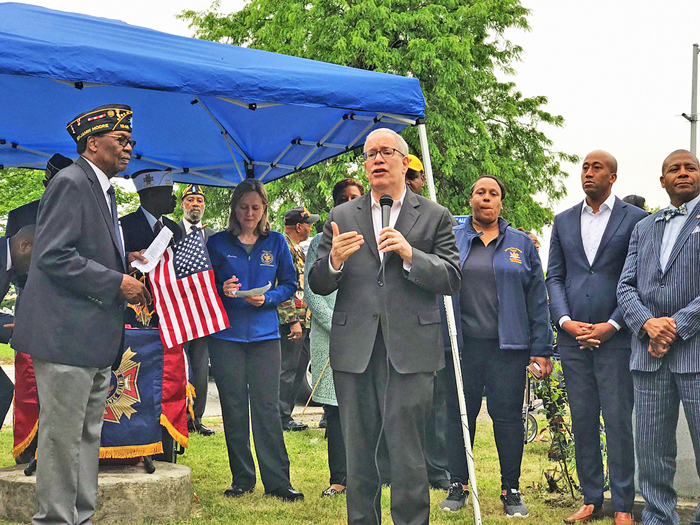 File Photo
Repealing 50-a does not go far enough, according to Comptroller Stringer.

Cuomo pointed out that recent years have shown a number of frivolous and false calls to 911 based on the callers’ personal discomfort with other people and not for any particular threat. The new law makes it a civil rights violation to call 911 to report a non-emergency incident involving a member of a protected class without reason to suspect a crime or an imminent threat.

“Say Their Name” also establishes an Office of Special Investigation within the Office of the Attorney General to investigate and, where appropriate, prosecute cases where the death of a person follows an encounter with a law enforcement officer. The law also requires the new Office of Special Investigation to produce a report explaining the reasons for its decision regardless of whether it chooses to pursue charges. According to Cuomo, this will help improve public confidence in the criminal justice system by removing a potential conflict of interest in these types of investigations.

According to the administration, Section 50-a of the State Civil Rights Law creates a special right of privacy for the personnel records of police officers, correction officers, and firefighters and paramedics employed by the State or political subdivisions. The current law prevents access to both records of the disciplinary proceedings themselves and the recommendations or outcomes of those proceedings, leading to records of complaints or findings of law enforcement misconduct that did not result in criminal charges against an officer almost entirely inaccessible to the public.

Repealing 50-a will allow for the disclosure of law enforcement disciplinary records, increasing transparency and helping the public regain trust that law enforcement officers and agencies may be held accountable for misconduct, according to the governor.

“Today we open a new chapter for New York State—one that is more transparent, more accountable, and more just,” said Assemblyman Dan O’Donnell (D-Manhattan).“As Section 50-a of the New York State Civil Rights Law is repealed and new police reforms are implemented, we will see meaningful change for our communities. It will come in the baton that isn’t swung, the gun that isn’t fired, and the life that continues uninterrupted. It will come in the form of answers for those who have lost family members to police violence, allowing them to feel some measure of peace. I am deeply honored to have sponsored this bill for the past five years, and to have played a role in addressing the deep systemic issues plaguing our nation.”

However, according to City Comptroller Scott Stringer, repealing 50-a does not go far enough. In a letter to Mayor Bill de Blasio and City Council Speaker Corey Johnson, Stringer urged the pols to pass legislation requiring all law enforcement disciplinary records be made available to the public, and not subject to case-by-case approval under the Freedom of Information Law. Stringer urged that case-level data be made accessible and regularly updated on the NYC Open Data portal, and law enforcement agencies should be required to report data on individual complaints and allegations of misconduct.

“FOIL must not become the next shield to delimit or delay disclosure. There is a legitimate public interest in understanding how law enforcement officers are interacting with the community members they are charged with serving and protecting, and we must not waste the time or tax dollars of New Yorkers by requiring the onerous submission of individual records requests in order to access this information,” Stringer wrote. “With that aim, I urge you to advance legislation requiring that all law enforcement disciplinary records be maintained and made available to the public outright in a searchable database, and that this data be made available in a fashion that is both timely and not subject to a FOIL request. Legislation should also require that case-level data be made accessible on the NYC Open Data portal. These steps would enable a wider range of stakeholders—from journalists and activists to academics and everyday New Yorkers—to analyze patterns in alleged misconduct and disciplinary outcomes, which will serve to inform policy and, ultimately, improve public safety.

“We invest our law enforcement officers with enormous powers, including the power to use deadly force, which makes full transparency around officer disciplinary records critical to both building trust with communities and fostering accountability,” Stringer added.“Of course, in releasing these records, the agency producing them must ensure compliance with [the ‘Say Their Name’ Reform Agenda], including ensuring that any information disclosed is material and pertinent to the public interest and that the confidentiality of individuals’ medical histories and other protected information is maintained.”