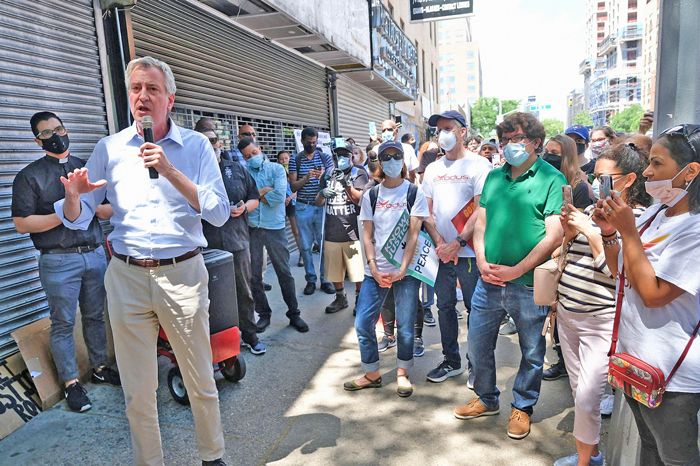 “These historic reforms will make the disciplinary process faster, fairer and more transparent. We will never stop working to strengthen the bonds of trust between officers and the New Yorkers they serve,” Mayor de Blasio said.

Governor Andrew Cuomo on Monday signed policing reform legislation requiring state and local law enforcement officers to report within six hours when they discharge their weapon; requiring courts to compile and publish racial and other demographic data of all low-level offenses; and requiring police officers to provide medical and mental health attention to individuals in custody.

According to the administration, the Police Statistics and Transparency Act—or STAT Act—requires courts to compile and publish racial and other demographic data of all low-level offenses, including misdemeanors and violations. The data collected must be made available online and updated monthly. The new law also requires police departments to report any arrest-related death to the Department of Criminal Justice Services and to submit annual reports on arrest-related deaths to the governor and the State Legislature.

The new package of laws includes a measure that requires that any law enforcement officer or peace officer who discharges their weapon, while on or off duty, where a person could be struck by a bullet from the weapon is required to verbally report the incident to his or her supervisor within six hours and prepare and file a written report within 48 hours of the incident.

The third piece of legislation in Monday’s policing reform package requires police officers, peace officers and other law enforcement representatives and entities to provide medical and mental health attention to any individual in custody. Police can be liable for damages for anyone who does not receive medical attention and suffers a serious physical injury or has their injury exacerbated by the lack of care. 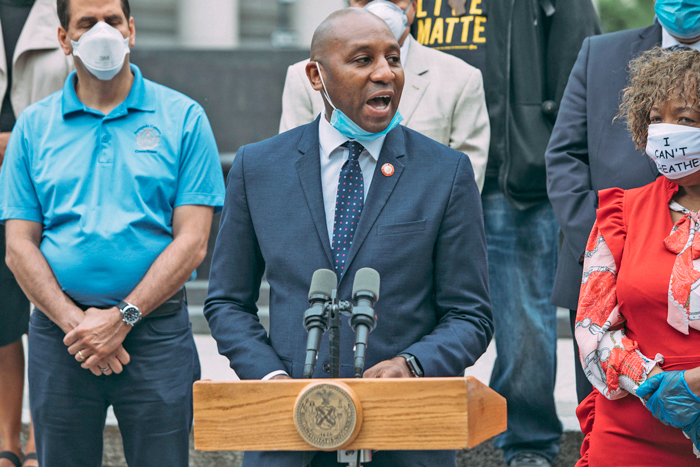 Photo Courtesy of Emil Cohen/NY City Council
“In 2020, technology is developing faster than ever before and we need to be able to adapt just as quickly to ensure that there are regulations and safeguards to protect our civil liberties,” said Councilman Richards.

“Police reform is long overdue in this state and this nation, and New York is once again leading the way and enacting real change to end the systemic discrimination that exists in our criminal justice and policing systems,” Cuomo said. “These critical reforms will help improve the relationship between law enforcement and the communities they serve and take us one step closer to righting the many injustices minority communities have faced because of a broken and unfair system.”

Additionally this week, the City Council is set to vote on a number of police reform bills. Thursday’s stated meeting features the Public Oversight of Surveillance Technology (POST) Act; a bill that makes it a crime for police to use chokeholds; another one that requires the NYPD to use a disciplinary matrix; and a fourth measure that makes it illegal for officers to hide their badge numbers.

According to the council, the Post Act was crafted with feedback from civil rights and civil liberties groups concerned over the lack of oversight of the NYPD’s use of surveillance tools on the public. The NYPD has access to cell site simulators to capture cell phone information, facial recognition technology, license plate readers and X-ray vans, but there has been little public information on the capabilities of these tools and how the NYPD’s uses the private information they collect. In addition, the public has no way of knowing what other surveillance tools the NYPD uses.

“In 2020, technology is developing faster than ever before and we need to be able to adapt just as quickly to ensure that there are regulations and safeguards to protect our civil liberties. I am proud to pass the POST Act knowing that while Big Brother is watching us, we are watching Big Brother,” said Councilman Donovan Richards (D-Laurelton), chairman of the Committee on Public Safety.

And on Wednesday, Mayor Bill de Blasio announced new reforms to the NYPD’s disciplinary system. According to the administration, these reforms will expedite the investigation and discipline for incidents involving substantial bodily injury to a member of the public, and provide greater transparency on disciplinary records and decisions.

The mayor also announced that the City will apply its new body-worn camera release policy retroactively, and release all audio and video footage from older cases that fit expanded criteria.

“These historic reforms will make the disciplinary process faster, fairer and more transparent. We will never stop working to strengthen the bonds of trust between officers and the New Yorkers they serve,” de Blasio said.

According to Hizzoner, for incidents involving substantial bodily injury, the Police Commissioner will make an initial determination on whether to place the officer on modified duty or suspension within 48 hours of the incident. NYPD will conclude the investigation into such incidents within two weeks, unless there are evidentiary delays caused by circumstances beyond the control of the NYPD or where there is significant risk of interference with a criminal investigation. Currently, the Internal Affairs Bureau must file charges within 18 months for administrative violations and there is no time limit to file disciplinary charges for criminal conduct.

Additionally, the NYPD will publish all trial decisions or settlements reached going forward, effective immediately. NYPD will also post information for the approximately 1100 pending cases for which charges have been served. This information will include names, charges, hearing dates and resolutions when available. This information will be posted by mid-July.  The NYPD will also make comprehensive disciplinary records fully transparent online. The records of the pending cases will be prioritized for release.

This week, de Blasio announced new body camera footage release policy to promote transparency and accountability. All video and audio footage must be released within 30 days when: an officer discharges a firearm that hits or could hit someone; an officer discharges a Taser in a way that results in death or substantial bodily harm; or an officer’s use of force results in death or great bodily harm. This new policy will apply retroactively to all audio and video footage from older cases that fit criteria. All footage will be publicly available online, the mayor pledged.