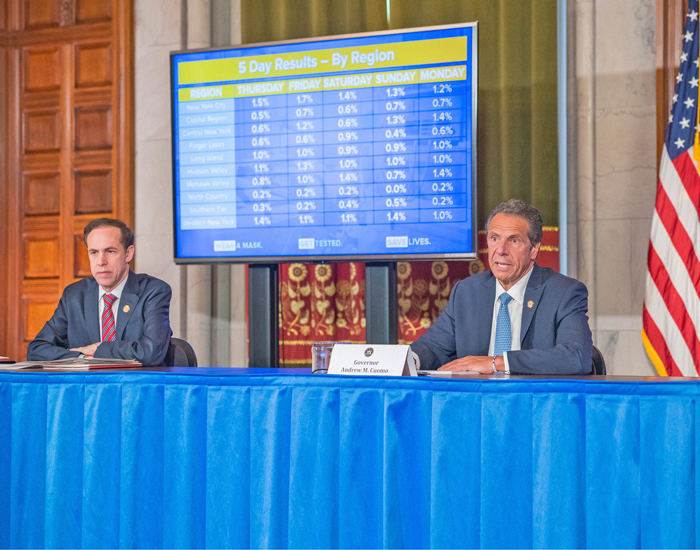 Once the global epicenter of COVID-19, with the most daily new infections and the highest number of virus-related deaths, the Empire State can now boast the nation’s lowest rate of transmission, 0.77, according to the website rt.live, Gov. Andrew Cuomo announced Friday.

“New York State: the lowest rate of transmission, meaning the virus is spreading at the lowest rate in the State of New York, of every state in America; that is incredible,” the governor said.“We were the number one state in terms of infection, number one in the nation, number one on the globe per capita, and now we’re the last state in terms of rate of transmission. That is because New Yorkers stepped up, they were smart, they were disciplined, they did what they had to do, and we have to stay there. We have to stay there. Now is no time to forget what got us here. We have to stay smart.”

“Where we are today is a pivotal point in this entire situation with the coronavirus. You see states all across the nation where the infection rate is going up dramatically. You have states now that reopened that are scaling back their reopening. That’s how bad the spikes are,” Cuomo added. “States that have reopened too quickly or uncontrolled are now starting to close down. So we are the exact opposite. Since we’ve reopened, the number has continued to go down, believe it or not. We reopened. It continues to go down because we’ve been disciplined in our reopening, and that’s what we have to continue to do.”

New York’s executive also cautioned that now is not the time for complacency.

“Well, we’re reopening, we’re out the woods, everything is fine. No. Reopening is actually much harder than closing. Closing was abrupt and disruptive, but it was simple. Everything is closed. Reopening is more delicate and more nuanced,” Cuomo noted.“If you look at the states and the countries that have been reopening, more of them have gotten into trouble than not. As we sit here today, states are getting into trouble. Newspapers will tell you more than a dozen states are now seeing increases. Texas, 36 percent increase since Memorial Day. Reopen, reopen, reopen. Be careful, be careful, be careful. California, the cases are still going up. Florida, the cases are going up. Look at those curves around the nation. Why? Because if you just reopen, if you just increase activity, the virus spread is going to up compared to the virus spread when you were closed.

“That’s common sense,” the governor continued. “You have to reopen smartly, and safely, and intelligently. Otherwise, you will see the increase, especially in a place like New York City with that density. People on sidewalks, people on buses, people on subway cars. It has to be done right and we have to stay disciplined and the evidence is all around us, what happens if we’re not.”