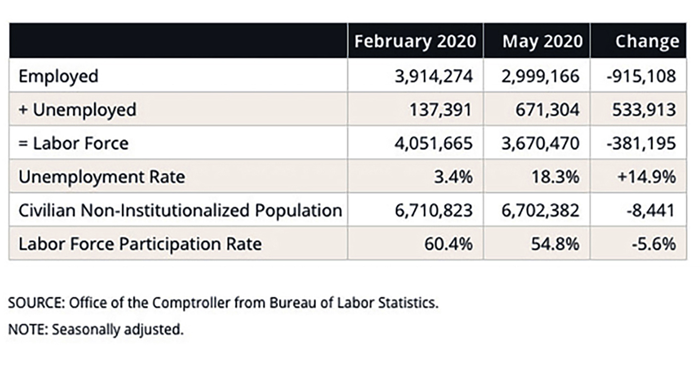 The City unemployment rate rose to 18.3 percent in May from 15.8 percent in April, bucking indicators of a potential national economic rebound, according to an analysis of the city’s employment situation released Friday by City Comptroller Scott Stringer.

The comptroller’s report found that New York City’s economy may have a long road ahead as over 900,000 fewer New Yorkers were working in May than in February, with 534,000 newly unemployed since then and more than 381,000 workers dropping out of the labor force altogether.

The data also revealed that communities of color and young people under the age of 24 have been particularly hit hard by job losses.

Stringer noted that data released by the Census Bureau’s Current Population Survey, which unlike the Bureau of Labor Statistics data is not seasonally adjusted, shows a citywide unemployment rate of 19.9 percent. CPS data also indicated that the unemployment rate among men rose from 3.5 percent in February to 21.5 percent in May, while the rate for women rose slightly less sharply to 18.1 percent. Among Asian-American New Yorkers, the rate increased from 3.4 percent in February to 25.6 percent in May. The rates for Latinos rose to 25.1 percent and for African-American New Yorkers to 23.5 percent.

At the federal level:

Extend the $600 weekly unemployment benefit under the Pandemic Unemployment Compensation program beyond its current expiration next month; provide desperately-needed general fiscal relief to state and local governments, who continue to face the urgent service needs of their residents without adequate resources.

At the local level:

Restore the Summer Youth Employment Program, which was cut by the de Blasio administration in April. This would provide income and job opportunities to 75,000 City youth and mitigate the extremely high unemployment rate among youth; restart the stalled capital program as a means of generating good-paying jobs, expanding the workforce, and meeting our growing infrastructure demands; and increase and streamline opportunities for minority and women-owned businesses who have suffered the most during the city’s slowdown.

“The latest data on the city’s unemployment situation are alarming and further underscores the urgent need for swift, robust federal support,” Stringer added. “Communities of color and young people are bearing the brunt of our unemployment crisis; we need Washington to recognize the enormous scale of the losses we’ve suffered and get New York City the financial aid it needs. The federal government should extend the pandemic unemployment compensation benefit of $600 weekly while the COVID-19 continues to threaten lives and livelihoods. Here at home, there are a number of actions we can take to provide immediate relief. First, the City should restart our stalled capital program as a means of generating good-paying jobs, expanding the workforce, and meeting our growing infrastructure demands. We need to increase and streamline opportunities for minority and women-owned businesses that have suffered the most during the city’s slowdown, and restore the Summer Youth Employment Program so our children have viable pathways toward success. As our country and our city look toward reopening, we cannot leave behind the small businesses and workers that keep our economy running. We are the nation’s economic engine, and I urge Congress and City Hall to marshal our resources and stand up for New York City.”