Public Advocate Jumaane Williams’s bill would affirm the right to film police activities generally, and establish a cause of action enabling individuals to sue in state court for any violation of this right.

The City Council on Thursday voted in favor of a package of legislation aimed at addressing police misconduct and enacting substantial NYPD reforms.

Introduction No. 721-B would affirm the right to film police activities generally, and establish a cause of action enabling individuals to sue in state court for any violation of this right.

This bill would also create a defense where recording physically interfered with an official and lawful police function. Finally, the bill would require quarterly reporting on related incidents.

“From George Floyd, to Ahmaud Arbery, to Eric Garner, we have seen a near constant stream of video of police misconduct for several years,” said Public Advocate Jumaane Williams, the bill’s sponsor. “While these videos are often painful, they are also crucial. Again and again, we see that video evidence is one of the only ways to have a chance at accountability for officer misconduct. But again and again, we also see officers attempting to infringe on the right to record, and the transparency that comes with it, blocking attempts penalizing people who exercise this right. By codifying this right in city law, we further protect the ability for the public to provide transparency and demand accountability, and I thank the Speaker for recognizing the need to pass this bill now.” 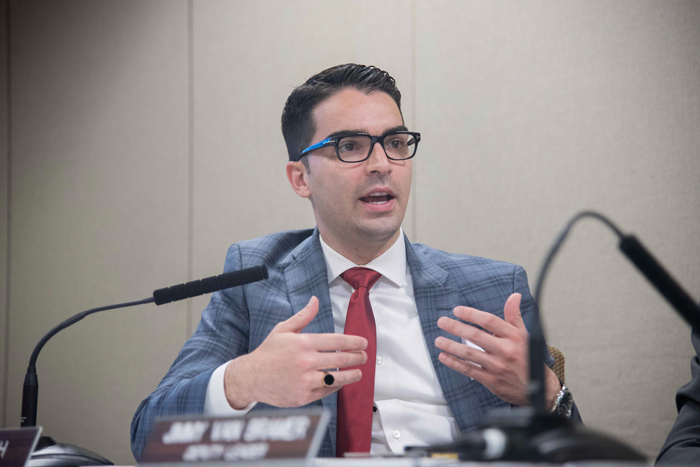 Photo Courtesy of John McCarten/NY City Council
As promised, Councilman Ulrich on Thursday introducing a resolution calling for a vote of no confidence in Mayor de Blasio.

Introduction No. 536-B would criminalize the use of restraints that restrict the flow of air or blood by compressing another individual’s windpipe or arteries on the neck, or by putting pressure on the back or chest, by police officer making an arrest. This would cover chokeholds, as well as maneuvers like placing a knee on a person’s neck. Any officer found guilty of using such a restraint could be found guilty of a class A misdemeanor. Such an act would be criminalized only if used while the officer is trying to make an arrest—not, for example, acting in self-defense.

“The NYPD banned chokeholds decades ago, but tell that to Eric Garner and the hundreds of men and women choked by police officers even since his death” said Councilman Rory Lancman (D-Hillcrest), the bill’s sponsor. “Today the Council does what the NYPD has failed to do: police the police by making it an actual crime for a cop to put someone in a chokehold or to sit, kneel, or stand on them so they can’t breathe.”

Introduction No. 1309-B would require the NYPD to develop a “disciplinary matrix,” which gives a recommended range of penalties for each type of violation. The City Police commissioner would retain the ultimate discretion to override the recommendation of the matrix, but the department would be required to report on how often the commissioner deviated from the matrix. The bill would also require public reporting on the development of the matrix, including the factors that were considered.

“Today’s package of bills sends a clear message to New Yorkers as well as every NYPD officer that no one is above the law, even if you’re enforcing it. For far too long, communities of color have endured injustice and fought in the battle for equal protection and civil liberties under the law,” said Councilman Donovan Richards (D-Laurelton), who sponsored Intro. 1309-B.

A preconsidered bill sponsored by Councilwoman Alicka Ampry-Samuel (D-Brooklyn) would require officers to display their shield number or rank designation at all times when the officer is performing their duties.

This bill would also create a private right of action for individuals who are subject to refusal of officers to display a shield number or rank designation.

“I am honored to sponsor this bill which will redress the rights of New Yorkers to identify police officers and empower them to take action when these rights are violated. Comprehensive police reform is only possible through a multi-pronged and joint effort in all layers of government. The legislative process is often so lengthy that advocates and members aren’t present to see the fruits of their labor. Today we have the opportunity to respond to the efforts and demands of the people in real time. I am proud to be part of a council that understands the importance of this moment and is prioritizing timely and much-needed legislation. The time is now,” Ampry-Samuel said.

Introduction No. 487-A would require the reporting and evaluation of surveillance technologies used by the NYPD. The department would be required to issue a surveillance impact and use policy about these technologies, including a description and capabilities, rules, processes and guidelines, and any safeguards and security measures designed to protect information collected. The Department of Investigation’s Inspector General for the NYPD would audit the surveillance impact and use policy to ensure compliance with its terms.

“Today’s package of police reform bills is a call to action in response to the deaths of Ahmaud Arbery, George Floyd, Breonna Taylor, and Tony McDade that ignited the start of a global movement,” said Councilwoman Vanessa Gibson (D-Bronx), the bill’s sponsor. “These bills are the floor and not the ceiling in ensuring transparency and oversight over the NYPD and that protections are in place for communities of color. This is an unprecedented time and we are all tired, but there is more work to be done.”

And, as he promised, Councilman Eric Ulrich (R-Ozone Park) introduced Resolution 1344-2020 during Thursday’s eventful Stated Meeting. According to council records, it is a measure “expressing a loss of confidence in Mayor Bill de Blasio and calling upon the Governor of the State of New York to bring charges to effectuate the removal of the Mayor for failing to maintain public order and safety during this period of persistent social unrest, in accordance with section 33 of the Public Officers Law and section 9 of the Charter.”