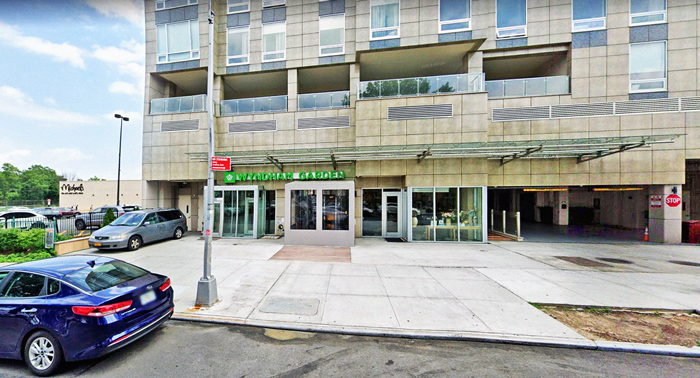 The Wyndham Hotel in Fresh Meadows currently houses “just over 100 people” who have been recently released from City and State correctional facilities.

City Councilmen Barry Grodenchik (D-Oakland Gardens) and Rory Lancman (D-Hillcrest) last Wednesday received an onsite briefing from representatives of the Mayor’s Office regarding the use of the Wyndham Hotel on 186th Street in Fresh Meadows to house individuals who have been recently released from correctional facilities.

According to the Mayor’s Office, the Wyndham Hotel is part of an emergency program established by the mayor whose aim is to avoid the spread of the coronavirus by reducing homelessness and reliance on City shelters by those released from City and State correctional facilities who do not have COVID-19 symptoms. Under the auspices of the City’s Office of Emergency Management, the Mayor’s Office of Criminal Justice has entered into a contract to temporarily house individuals at the hotel. Just over 100 people currently reside there, each in her or his own room. The hotel’s capacity is about 140 rooms, so the population will not exceed that number. The facility is run by a nonprofit organization called Exodus Transitional Community, which is under City contract to provide wraparound services, including case management, job placement, meals, and assistance finding permanent housing. Residents stay in the hotel only temporarily until they have permanent housing available. A private security firm has been hired and is onsite to monitor the building and its perimeter as well as the surrounding area, City officials told Grodenchik and Lancman.

“Unfortunately, though the facility has been open for about two months, the City did not provide any notification of this use to elected officials, the local community board, or civic leaders. The failure to inform the community was a serious mistake,” the councilmen said in a joint statement. “We are disappointed by the lack of communication and expressed that sentiment directly to the Mayor’s Office.”

According to the elected officials, normally, those who are released from City and State correctional facilities return to their families and communities; those who lack housing options sometimes enter the City’s shelter system. The Mayor’s Office said that providing temporary housing to these individuals during the pandemic avoids crowding in the shelters, where the virus can spread quickly, and avoids increasing street homelessness. Before the City set up temporary hotel housing, some people remained in jail even after their release dates because they had nowhere safe to go, so this program also aims, according to the Mayor’s Office, to avoid overcrowding in correctional facilities and to help stop the spread of COVID-19. The individuals in the Wyndham do not have coronavirus; those who do are isolated in other hotels as part of the city’s pandemic response, officials noted.

The councilmen said that the facility must prevent negative security incidents both in the hotel and in the surrounding area, demonstrate success in placing residents in permanent housing, and establish a functioning community dialogue group.

“In response to our request, Exodus agreed to set up a community advisory board, to include local elected officials, community board representatives, and civic and tenant leaders who represent the adjacent communities,” Grodenchik and Lancman reported. “The board will meet regularly to address any issues that may arise.”