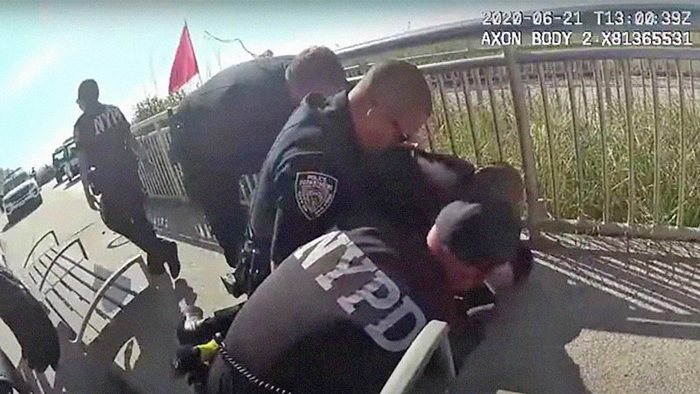 A Far Rockaway police officer has been charged with allegedly using a chokehold during an arrest on the Rockaway Beach boardwalk last month, Queens District Attorney Melinda Katz announced Thursday.

David Afanador, 39, a 14-year veteran of the NYPD who hails from Long Beach, L.I., was arraigned Thursday afternoon on a complaint charging him with first-degree attempted aggravated strangulation and second-degree strangulation; both are felonies.

Afanador pleaded not guilty and was ordered released on his own recognizance. His next court date is scheduled for Aug. 3.

According to the charges, Afanador responded to a call shortly after 8 a.m., Sunday, June 21, of someone screaming and yelling at people on the boardwalk. Afanador and several other police officers encountered three men who proceeded to taunt and heckle the cops as a couple of them simultaneously video-recorded the officers on their cell phones. At one point, Ricky Bellevue, 35, allegedly asked the officers if they were scared and appeared to retrieve a can from a trash receptacle. That’s when the four cops—including Afanador—grabbed Bellevue. Afanador allegedly wrapped his arm around the man’s neck as he was being pinned to the ground.

According to the charges, Afanador allegedly continued the chokehold as other officers handcuffed Bellevue. Within seconds, the man’s body appears on recordings to go limp and he loses consciousness. Only after another police officer pulls on Afanador’s back does he remove his arm from around Bellevue’s neck.

Body-worn camera footage shows these police officers were cursed at and badgered, Katz noted. Every day, however, cops find themselves in circumstances that require them to exercise restraint and are tasked with de-escalating potentially volatile conflicts, Katz continued.

According to the complaint, Officer Afanador’s alleged actions showed his intent to impede the normal breathing or circulation of Bellevue when he placed his arm around the man’s neck and only relented when his fellow officer intervened.

According to Katz, even under the most difficult of circumstances, this maneuver, this kind of action, is exactly the kind of police conduct that the NYPD has banned and the State Legislature recently criminalized.

The anti-chokehold measure was named after Eric Garner, who died on Staten Island in July 2014 while being arrested. A NYPD officer used a chokehold on the 43-year-old Garner, who repeatedly said “I can’t breathe.” Garner died as a result of combined neck and chest compressions that led to a fatal asthma attack.

“The ink from the pen Gov. [Andrew] Cuomo used to sign this legislation was barely dry before this officer allegedly employed the very tactic the new law was designed to prohibit,” Katz added. “Police officers are entrusted to serve and protect and the conduct alleged here cannot be tolerated. This police officer is now a defendant and is accused of using a chokehold—a maneuver we know has been lethal. This Office has zero tolerance for police misconduct.”