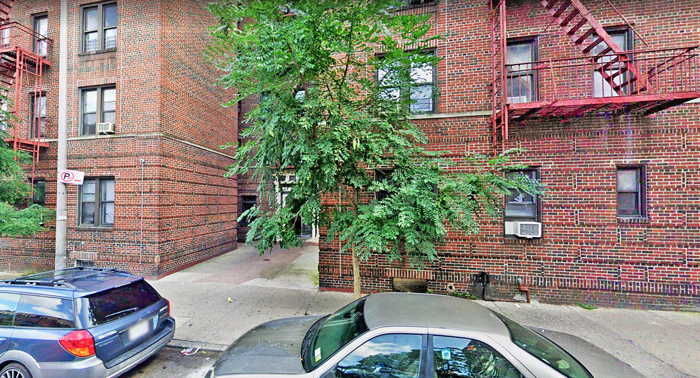 Mendoza allegedly stabbed his girlfriend to death inside their apartment in this building on 34th Road in Jackson Heights.

A Jackson Heights man has been charged with fatally stabbing his girlfriend inside their apartment after an early morning argument on Friday, July 3, Queens District Attorney Melinda Katz announced last Wednesday.

Carmelo Mendoza, 41, was arraigned on Thursday on a criminal complaint charging him with second-degree murder, assault in the second degree and criminal possession of a weapon in the fourth degree. He was remanded into custody and ordered to return to court on Aug. 7.

According to the charges, in the early morning hours of Friday, July 3, Mendoza, who is the boyfriend of the victim, Yaqueline Collado, was inside their 34th Road apartment when they began to argue. During the dispute, the 45-year-old woman told her 19-year-old daughter, who also lives in the apartment, to leave so she would not hear them argue.

According to the complaint, as the daughter was inside of her room she heard her mother scream her name. The young woman immediately exited her room and rushed toward the couple. She allegedly saw Mendoza stab her mother repeatedly in the chest, neck, and torso. The daughter attempted to stop Mendoza by throwing items at him and she tried to push him off of her mother. Mendoza then fell to the floor, but got back up and allegedly continued to stab Collado. The daughter then heard her mother say to her in Spanish, “I’m dying, leave.” The daughter, whose leg was slashed when she tried to intervene, then ran out of the apartment and began banging on her neighbors’ doors, screaming for help. The young woman then called her boyfriend and 911.

According to the charges, when police arrived at the apartment building they were informed by the victim’s daughter that Mendoza was still inside the residence. Upon entering the unit, police officers found Mendoza lying on top of the victim and observed Collado lying in a pool of blood with a kitchen knife nearby.

Collado and Mendoza were both rushed to Elmhurst Hospital where, as a result of the approximately 14 knife wounds, Collado was pronounced dead. Mendoza is being treated for self-inflicted stab wounds to his abdomen.

“The defendant in this case is accused of committing a despicable act of violence against a woman he supposedly loved. In the heat of an argument, the defendant allegedly stabbed the victim to death in front of the woman’s daughter. The defendant is hospitalized, but in custody and will be held accountable for his alleged brutal actions,” Katz said.

If convicted, Mendoza faces up to 25 years to life in prison.