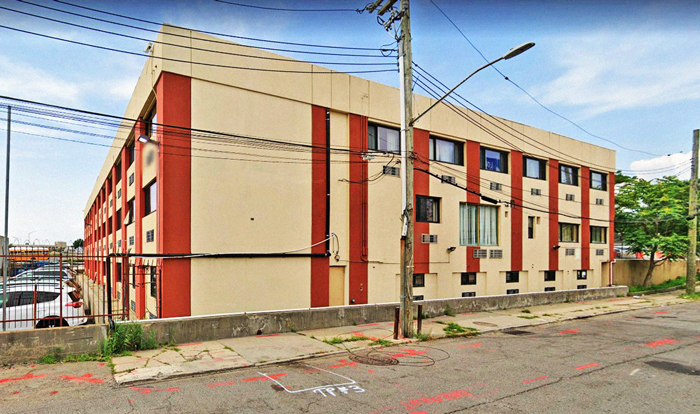 Miles allegedly held the two teens against their will at the JFK Inn on South Conduit Avenue.

A Jamaica man has been charged with allegedly holding two teenage girls against their will at a South Conduit Avenue hotel near John F. Kennedy International Airport last month, forcing them to have sex with strangers for money and then pocketing the cash, Queens District Attorney Melinda Katz announced Thursday.

Tyrone Miles, 29, has been arraigned on a criminal complaint charging him with two counts each of compelling prostitution, sex trafficking, sex trafficking of a child, promoting prostitution in the second degree and rape in the third degree. Bail was set at $500,000 bond/$250,000 cash; Miles has been ordered to return to court on Aug. 8.

According to the charges, on June 5, Miles and the girls, 16 and 17, entered the JFK Hotel on South Conduit Avenue along with an unapprehended female and stayed there through at least June 12. While at the hotel, Miles allegedly engaged in sexual intercourse with the 16-year-old girl. He later told the teenager that she would be having sex with other men for cash. When the girl refused, Miles allegedly told her “I will kill you.” He further instructed her to tell the strangers she had sex with that she was born in June 2000—making her legally old enough to consent to sex.

According to the complaint, while at the hotel, the 16-year-old girl had sex with several men in exchange for cash that Miles allegedly pocketed. He refused to give the teenager any of the money. When the victim attempted to leave the location, she was allegedly struck in the face and body by Miles, causing substantial pain and bruising to her body. As a result of the assault, the teenage girl feared that if she didn’t comply with Miles’s demands he would hurt her—or perhaps even worse.

The second victim, who is 17, was also allegedly told by Miles that she would be having sex with men for money at the same hotel. During her time at the hotel, the 17-year-old had repeated sex dates with strangers. The money was allegedly collected the unapprehended female, who would later give the cash to Miles. The 17-year-old, just like the other victim, was never given any money nor was she fed by Miles or the unapprehended female. This victim also feared that if she didn’t comply with Miles’s demands he would beat her or worse.

According to the charges, the two victims were kept separated from each other. Receipts obtained during the investigation from the JFK Inn indicate that Miles, who provided identification to the hotel, rented room #333 between June 5 and June 12. In addition, video surveillance obtained from the JFK Inn depicts Miles and an unapprehended female walking into the location with the two teenage girls on June 5; additional video surveillance depicts Miles and the 16-year-old girl walking in and out of Room #333 on June 12 and at least one unidentified male entering the room.

“The defendant is accused of having sex with one teenager and forcing both girls into having sex with strangers for cash—money that he pocketed for himself,” Katz added. “The youngsters are now safe and away from the clutches of this alleged sex trafficker, who is accused of using brute force and threats to control and exploit the teenagers. The defendant will be held accountable for his alleged actions.”

If convicted, Miles faces 10 to 50 years in prison.