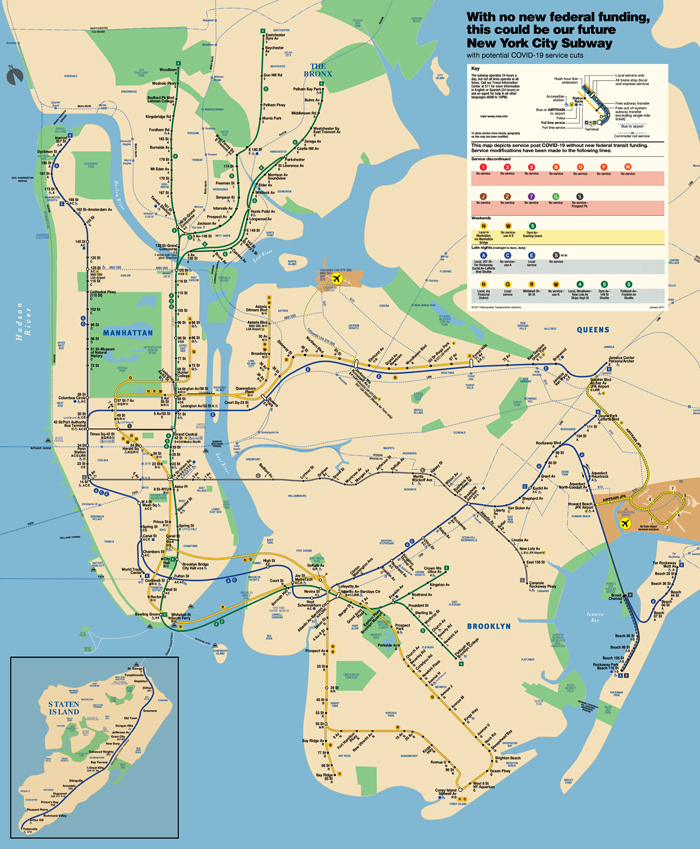 Leadership at the Metropolitan Transportation Authority may soon face dire decisions and consequences if the agency doesn’t get more federal aid—and fast, according to a new analysis by the commuter-advocacy group Riders Alliance.

“Doomsday on the MTA” features graphic depictions of the wholesale destruction of public transit service that could hit the region next month if Congress doesn’t act.

According to the Alliance, because of pandemic-related losses and costs, the MTA needs $3.9 billion, roughly half its operating budget, to maintain operations through the end of 2020. Without a new federal cash infusion in the next month, devastating service cuts could isolate entire communities and threaten horrific overcrowding that would endanger commuters during COVID-19.

Here are the three scenarios that the MTA might have to choose from if the agency doesn’t receive federal aid soon:

“This is an unprecedented time in our history and it requires strong, demonstrated leadership from this body, as well. We support an additional $32 billion in emergency aid to transit systems through the end of 2021 not only to keep these systems operational, but also to signal to our constituents that we will be ready for the economic recovery we are all working towards,” Gillibrand and her colleagues wrote to Senate Majority Leader Mitch McConnell and Senate Minority Leader Chuck Schumer.