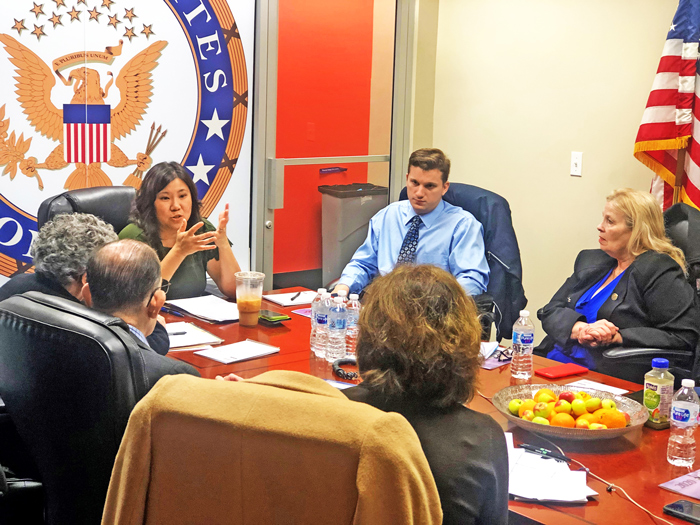 “The Trump administration’s immigration policies are flawed at best; at worst, they are deeply destructive and harmful to those who seek a better future in our country,” Rep. Meng (l.) said.

According to Meng, the Immigration and Nationality Act allocates 480,000 visas annually for family-sponsored categories; 140,000 visas annually for employment-sponsored categories; and 55,000 for diversity visas. Due to COVID-19 and the curtailing of immigration operations both abroad at U.S. embassies and consulates, and at U.S. Citizenship and Immigration Services, only a fraction of these visa allocations are being or will be used by the end of the current fiscal year, Meng noted.

“The Trump administration’s immigration policies are flawed at best; at worst, they are deeply destructive and harmful to those who seek a better future in our country,” Meng said. “I’ve been fighting the administration’s efforts to close the door to immigrants since the very beginning. The President’s recent proclamations on suspending entry of new immigrants extend the wait period for those in line for family-based visas and the diversity visa program. I have constituents who have waited over a decade for their employment-sponsored visas to be available. Consequently, they cannot accept work promotions or accept any job offers. I have other constituents with children who are going to age out because they have been waiting for their family-sponsored visas to be available. Consequently, these children may have to start a new immigration application, and then go through another lengthy process while being separated from their families. The vibrant, multicultural nation that we see today is in part due to our current family-based and employment-sponsored immigration system, and diversity visa program. Our country prides itself as a ‘nation of immigrants,’ its diversity, and its policies to preserve family reunification. This coronavirus pandemic has uprooted every facet of our nation and everyone’s lives. It has complicated an already lengthy immigration process.”

Additionally, on Tuesday, Meng ripped President Donald Trump for what she characterized as attempting to ban undocumented immigrants from being counted in reapportionment for Congress. Meng also announced that she will introduce legislation to block the effort.

“President Trump’s unconstitutional attempt to count some people instead of ALL people for reapportionment will fail just like his unsuccessful attempt to add a citizenship question to the 2020 Census,” the congresswoman added. “I helped defeat that effort and I will do the same with his latest move to undermine the constitution and do further harm to immigrant communities. From the Muslim travel ban to separating families at the U.S.-Mexico border, this president will do anything he can to advance his anti-immigrant agenda, and now he is using reapportionment to expand that cruel and un-American effort.”