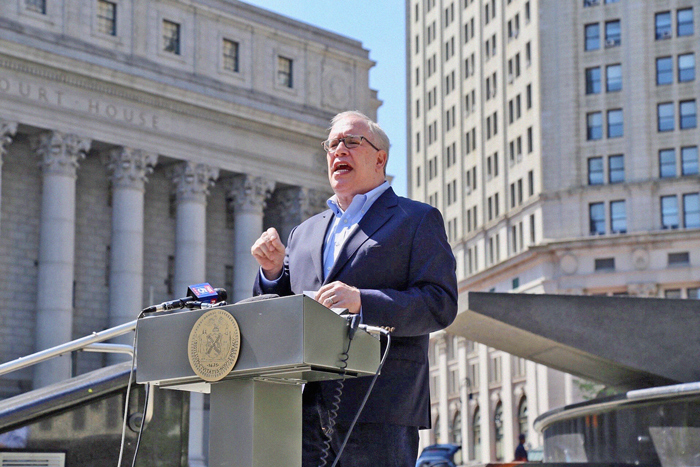 “The DOT is dragging its feet on making necessary upgrades to its system for installing and maintaining street name signs,” Comptroller Stringer said.

The City Department of Transportation’s oversight of the installation and maintenance of street name signs has been “persistently inadequate,” according to a follow-up audit of DOT released on Friday by City Comptroller Scott Stringer.

According to Stringer’s audit, DOT failed to implement several recommendations from Comptroller Stringer’s prior audit, issued in 2017—including that it develop a complete inventory of street name signs throughout the five boroughs and a comprehensive plan for identifying those that need repair and replacement, and that it ensure that complaints filed through the City’s 311 service are investigated and addressed in a reasonable time frame.

The audit also revealed that DOT still lacks a concrete plan to implement those needed reforms. Auditors found, for example, that DOT failed to address 46 of 50 sampled 311 complaints it received in July 2017 and January 2018 timely. DOT’s continuing failure to address 311 complaints promptly means that New Yorkers may never know whether the problems they report resulted in action. This issue is of even greater concern because DOT primarily relies on complaints to identify issues involving street name signs. Of the 5,574 street sign complaints DOT received between July 2017 and February 2019, the overwhelming majority—5,187 complaints—came through the 311 service.

Stringer’s 2017 audit found significant deficiencies in DOT’s maintenance efforts and tracking system and made six recommendations to address the weaknesses found. Of the six prior audit recommendations, DOT implemented one recommendation—that it ensure that work orders are approved before being sent to the contractor. DOT also partially implemented a recommendation that it continue its efforts to develop a methodology for tracking and documenting intersections where street name sign surveys have been conducted.

However, DOT did not implement the four remaining recommendations:

Take steps to identify and document its full inventory of standard street name signs throughout the city; develop a comprehensive plan for conducting surveys to identify street name signs that need to be repaired and replaced throughout the city; establish protocols to ensure that 311 complaints are investigated and addressed in a reasonable time frame; establish time standards for addressing street name sign repairs/replacements once the need has been identified and regularly monitor how well it is meeting those standards.

According to Stringer, as a result of DOT’s failure to implement his office’s recommendations, delays continue to affect its installation and maintenance of street name signs. For example, in a sample of 309 work orders, the comptroller’s auditors found that:

On average 125 business days (ranging from 70 to 765 business days) elapsed between the date a DOT inspector prepared a work order and the date a DOT director approved it for assignment to a DOT contractor to repair or replace a street name sign; it took DOT an average of 213 days (ranging from 116 days to more than 3 years) to complete a work order—from the date a DOT survey found that a sign needed repair or replacement to the date DOT verified that its contractor completed the job.

“The DOT is dragging its feet on making necessary upgrades to its system for installing and maintaining street name signs,” Stringer added.