The TWA Hotel and Fort Totten Building 207 are among the winners of the prestigious 2020 Lucy G. Moses Preservation Awards, The New York Landmarks Conservancy recently announced.

The awards are the conservancy’s highest honors for excellence in preservation. According to the NYLC, the honors recognize individuals, organizations, and building owners for their extraordinary contributions to the city.

According to NYLC officials, the TWA Hotel opened in May 2019 with an extraordinary attention to detail, design, and respect for the landmark. Eero Saarinen’s TWA Flight Center is one of the world’s most significant examples of mid-century modern architecture. Since opening in 1962, the building’s sweeping, expressive form has served as a metaphor for flight. The Moses award marks restoration of the original building, which had been vacant for almost two decades, and reuse of the landmark, with three new structures, as MCR/Morse Development’s TWA Hotel at 1 Idlewild Dr. 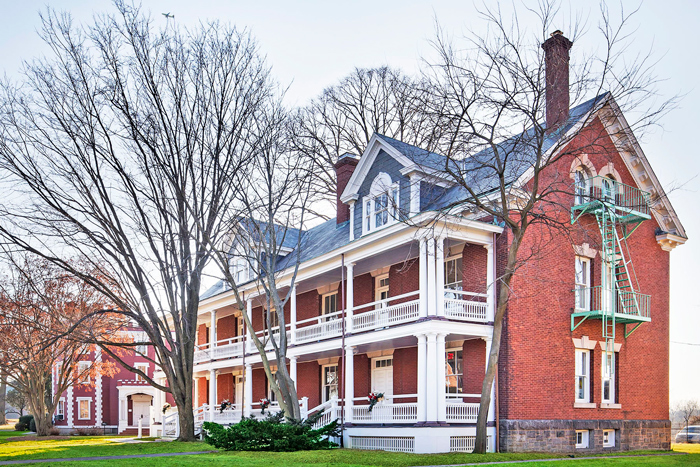 Building 207 is located within the 136 acres of Fort Totten in Bayside. The restoration and reuse of the stately Colonial-Revival style building is the happy end of a long journey, NYLC officials noted. The building was in terrible condition, with a damaged brick facade, unstable double-decked porch, decrepit interiors, antiquated systems, and a colony of raccoons in residence.

Building 207 was constructed as a residence by the Office of the Quartermaster General in 1905 and remained active until 1969. Then it was left vacant for decades. In the 1970s, Fort Totten became a City park, and in 2002, the Center for the Women of New York started negotiations with the NYC Parks Department to adapt it as the organization’s new headquarters. The public-private partnership required review from multiple City and State agencies. That process, along with a private fundraising campaign, delayed the start of construction for many years.

“This year’s Lucys will be an especially joyous celebration of great preservation work and great preservation leaders,” said Peg Breen, president of The New York Landmarks Conservancy. “It is heartening to see how the awards have grown over the past 30 years and how much preservation has been embedded into the fabric of the city.”

Both Queens projects will be recognized at the Virtual Ceremony on Sept. 23 at 6 p.m., with a Zoom link available at nylandmarks.org.