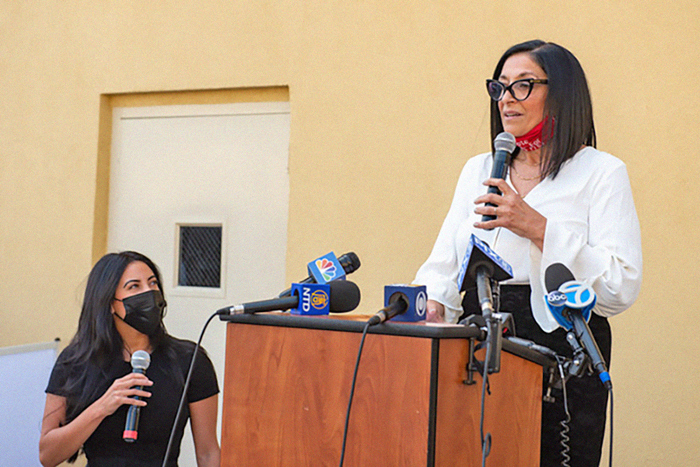 Photo Courtesy of the Ariola Campaign

“Queens patrons can drive a few minutes into Nassau and dine indoors, which makes no sense and is quickly killing Queens restaurants,” Ariola said.

Owners of a Little Neck restaurant recently filed a class action lawsuit against the City and the State on behalf of restaurateurs across the five boroughs, seeking an annulment to the indoor dining ban, and more than $2 billion in damages.

“Queens is the most diverse county in the world. Many restaurant owners and their employees are minorities and immigrants who came here in search of the American Dream but instead, found de Blasio’s Nightmare,” Ariola said. “Bill de Blasio’s cruel indifference to industrious business owners and to the hardworking minorities and immigrants they employ must never be forgotten. Why doesn’t de Blasio care about them? If you think it’s bad now, just wait. Wait until more of our businesses are forced to permanently close, laying off all their hardworking employees. Where will they live when they can’t pay their rent? Where will their children go?”

Ariola, fresh off an impressive fundraising period that saw her accrue $73,336, while her opponent, City Councilman Donovan Richards (D-Laurelton), raised a paltry $6,855 in the same time, ripped Mayor Bill de Blasio and his administration Thursday.

“We are here because we believe that Queens is the most wonderful place in the world—and worth fighting for. I want all our grandchildren to stay here in Queens and I want them to be able to eat in great restaurants like Il Bacco,” she added. “We’re standing 500 feet away from the Nassau County border, where some indoor dining is allowed, along with every other part of New York. Queens patrons can drive a few minutes into Nassau and dine indoors, which makes no sense and is quickly killing Queens restaurants.”

“It’s time to allow indoor dining in New York City with reduced capacity and clear guidance to ensure social distancing and safety,” he said. “This is crucial for restaurant owners, who have been particularly hard hit by the pandemic and the resulting drop in tourism. Summer is winding down, and they need to begin planning for the colder months. Of course, we will continue to monitor the City’s COVID-19 rates, just as we must for all of our businesses. We know that the restaurant industry employs many New Yorkers, including many immigrants. Its health and well-being are imperative to our city. The rest of the state has been allowed to reopen their restaurants for indoor dining, and New Jersey is allowing indoor dining come Friday. Now is the time to allow it in New York City. Our restaurants and our city’s economy can’t wait.”