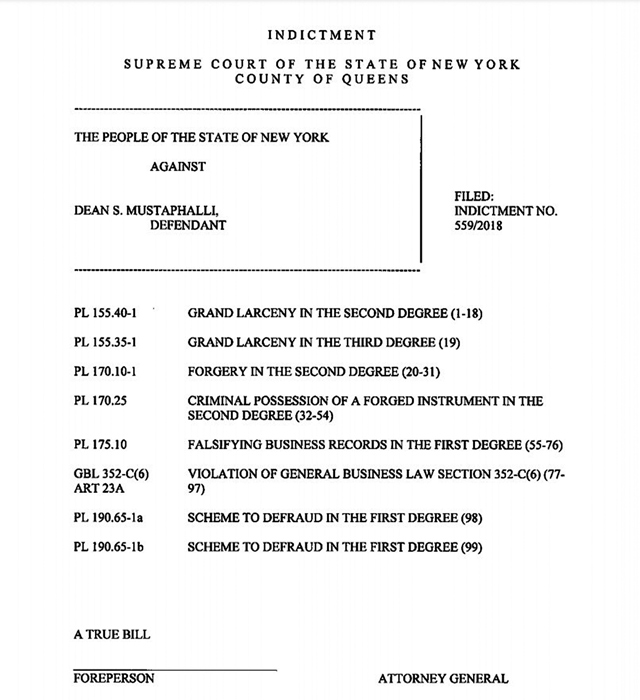 Photo Courtesy of the Office of the New York Attorney General

In May 2018, Mustaphalli was arrested on a 99-count criminal indictment.

The owner of a defunct Forest Hills hedge fund has been sentenced to three to nine years in prison after pleading guilty to operating a multi-million-dollar securities fraud scheme aimed at defrauding more than 50 investors—many of whom were elderly and at or near retirement, State Attorney Genaral Tish James announced Friday.

Dean Mustaphalli invested much of these 50 individuals’ monies in his hedge fund without their knowledge or consent, bringing in more than $11 million between 2011 and 2016, and resulting in many of his victims losing their life savings.

In addition to his prison term, Mustaphalli has been ordered to pay $260,000 in criminal restitution; and sign confessions of judgment in favor of the victims named in the indictment, totaling more than $2.3 million dollars. As part of a separate civil order filed by the Office of the Attorney General in Manhattan Supreme Court, Mustaphalli entered into an additional judgment in favor of his victims in the amount of $6 million, and he is permanently barred from engaging in any business related to the issuance or sale of securities in New York.

Mustaphalli’s scheme primarily targeted elderly New Yorkers, most of whom were immigrants or female, and who had been his clients for many years. These victims had very little investment experience and relied upon his advice. As their investment advisor, Mustaphalli knew his victims’ conservative investment objectives and that many of them were planning for retirement. Nevertheless, without their knowledge and consent, Mustaphalli diverted his victims’ safe investment portfolios into MCPF, a hedge fund he solely controlled. Many of these illicit transfers were made at his victims’ most vulnerable moments, such as after the loss of a child or spouse, during a divorce, or while battling an illness, James noted.

Last December, Mustaphalli pleaded guilty to 25 felony counts of the OAG’s criminal indictment—including grand larceny in the second degree, scheme to defraud, falsifying business records, and felony securities fraud under the Martin Act. Earlier this year, the Court heard statements from multiple victim-investors who shared the devastating impact that Mustaphalli’s crimes continue to have on their lives. Many victims worked multiple jobs to save money for their retirement, but now have had to re-enter the work force or must rely on their children for financial support. Multiple victims testified that Mustaphalli robbed them of more than just their financial independence, but also of their goal of leaving something for their children and grandchildren.

“Dean Mustaphalli stripped numerous New Yorkers of their independence and security when he invested millions from their retirements in high-risk ventures without their consent,” James said. “In just four years, Mustaphalli’s massive fraud drove immigrants and individuals nearing retirement into the poorhouse and left them with pennies on the dollar, forcing many back into the workforce. We will not allow this greed to go unchecked in New York, which is why we will continue to use every resource at our disposal to pursue all who attempt to defraud and take advantage of those most vulnerable.”