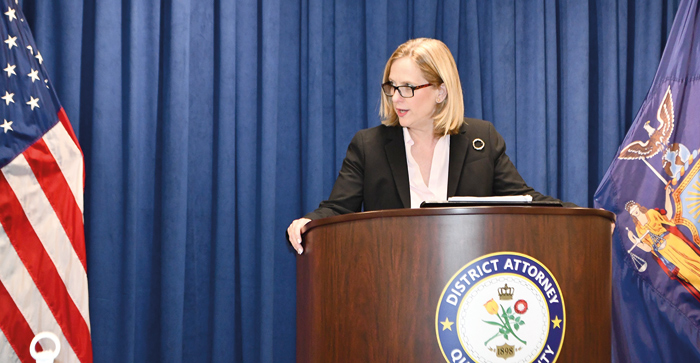 “Of course our airports must be safe and secure for travelers, but they also must be trusted by international companies transporting cargo to our region—especially during a pandemic when our city needs PPE, test kits, medical supplies and equipment,” DA Katz said.

The main defendants are David Lacarriere, 33, and Springfield Gardens resident Gary McArthur, 43, both truckers who formerly worked at JFK Airport. Lacarriere, McArthur, and four other defendants are variously charged in a 22-count indictment with grand larceny, conspiracy, criminal possession of stolen property and other crimes. 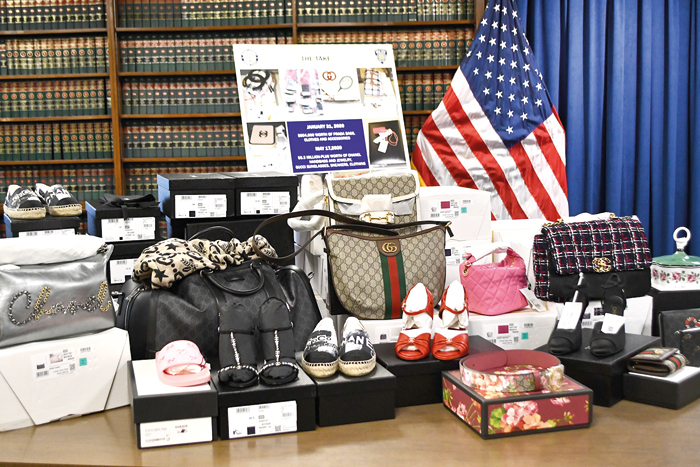 According to the indictment, on the night of Jan. 31, 2020, Lacarriere, using his knowledge of how shipments are picked up at the airport, went to the receiving office for an air cargo importer. He allegedly showed a forged document listing the correct airway bill and flight details for a shipment of Prada products. He and McArthur, who enlisted the assistance of two others, allegedly used a tractor trailer to load four pallets of Prada merchandise into the truck and drove away.

According to the charges, this first heist netted the defendants approximately $804,000 in Prada bags, clothes and accessories. A few days later on February 4, 2020, police located the trailer used in the robbery. The inside was empty, except for the interior being doused in bleach.

Continuing, according to the indictment, on May 17, 2020, the same routine was repeated in a second JFK heist. One of the defendants posed as a truck driver and presented another forged document authorizing the release of merchandise from the same air cargo import company. Defendants Lacarriere, McArthur and Davon Davis and others allegedly hauled away 5 air freight pallets containing thousands of pieces of Chanel and Gucci merchandise valued in excess of $4.4 million.

Again, as detailed in the charges, the defendants allegedly abandoned the trailers used in the heist. One trailer was found on May 29, 2020 on 56th Road in Maspeth. Inside, police found shipping pallets, wrapping material, shipping tags and display cases. The interior of this trailer was also drenched in bleach.

Katz said, in June 2020, police traced McArthur, Lacarriere, Davis and an unapprehended co-conspirator to a non-operational beauty salon allegedly used as a stash house for the stolen goods. Surveillance video shows the defendants including Davis, who lives in Long Island City and is a former employee of Delta Airlines, going in and out of Candi World Beauty Bar at Guy R. Brewer Boulevard and 147th Avenue in Jamaica. Davis has a connection with the owner of the closed beauty shop. It appeared the establishment was allegedly used by the defendants to store their stolen merchandise.

When police arrived to search the beauty shop on June 3, they allegedly interrupted a sale of stolen designer goods. According to the charges, another unapprehended co-conspirator allegedly was the middle man and arranged for Lacarriere and McArthur to sell Alan Vu 117 items – mostly Chanel handbags. Law enforcement observed Vu loading more than $300,000 worth of merchandise into the back of his white Mercedes SUV.

Once inside Candi World, police executed a Court-authorized search warrant and discovered mountains of boxes stuffed with stolen merchandise still in the manufacturers’ packaging. In all, police recovered more than 3,000 Gucci items—clothes and bags and other accoutrements; and just over 1,000 Chanel products—purses, jewelry, sunglasses and other accessories.

The estimated value of the recovered merchandise totals more than $2.5 million.

“The safety and security of this county’s airports are a top priority. Teaming up with our law enforcement partners, we relentlessly pursued the suspects, who allegedly used forged documents and their insider knowledge as former airport workers to steal air cargo. Of course our airports must be safe and secure for travelers, but they also must be trusted by international companies transporting cargo to our region—especially during a pandemic when our city needs PPE, test kits, medical supplies and equipment,” Katz said. “I would like to thank both the PAPD and the FBI’s JFK Task Force for their diligence in taking down this crew.”

Port Authority Chief Security Officer John Bilich added, “This multi-agency effort was a success for the security of the region and the rule of law. Detectives from the Port Authority Police Department along with FBI agents, and the Queens DA’s Office displayed unrelenting dedication and commitment to solving this case and making sure that the perpetrators will be prosecuted to the fullest extent of the law.”

Katz noted that two other unapprehended co-conspirators still are being sought.