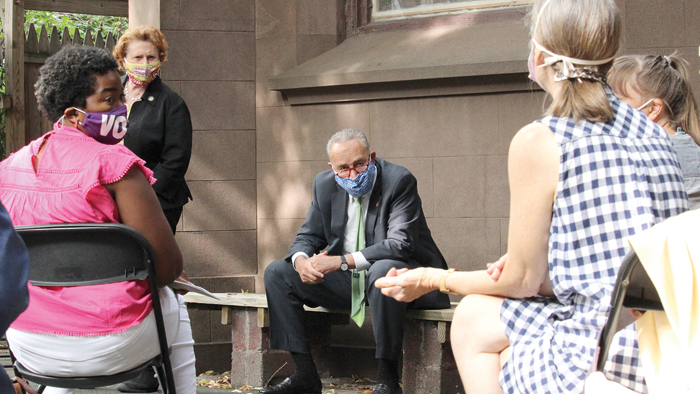 “If the feds can start an effective [mask] campaign before the winter sets in, and lower the political temperature around the safety measure, using science, lives could be saved,” Sen. Schumer said.

Revealing that the cancellation of a U.S. Department of Health and Human Services plan to prioritize the COVID-19 vaccination of “Santa Claus” performers possibly ahead of doctors, nurses and other essential workers just freed up a portion of a $250 million federal public service announcement fund, Senate Minority Leader Chuck Schumer called on the Trump administration to reallocate the freed-up funds and launch a national “Wear a Mask” effort across the nation and to start it ASAP as coronavirus cases climb across the country.

“By halting the plan to seemingly put Santa performers at the front of any coronavirus vaccine line, possibly even ahead of doctors, nurses and other essential workers, HHS has just freed-up millions of public service announcement funds that should be used to encourage and educate people to wear masks, not costumes,” Schumer said. “That is why I am making it public that HHS still has the funds and calling on them to use them to launch a national ‘Wear a Mask’ effort as coronavirus cases climb across the country, and even here in New York. If the feds can start an effective campaign before the winter sets in, and lower the political temperature around the safety measure, using science, lives could be saved.”

According to the Wall Street Journal, the Trump administration wanted Santa performers to promote the benefits of a COVID-19 vaccination and, in exchange, offered them early vaccine access. Those who perform as Mrs. Claus and elves also would have been included, according to the Journal. The Journal said, the coronavirus ad effort—titled “COVID-19 Public Health and Reopening America Public Service Announcements and Advertising Campaign”—was intended to “defeat despair, inspire hope and achieve national recovery,” and that it was to include television, radio, online and podcast announcements, starting immediately. Schumer said this kind of a project could have used millions of dollars of HHS funds, and that with the plan halted, those funds are now again available.

According to CNBC, the average number of patients hospitalized with COVID-19 over the past several days rose by at least 5 percent in 36 states, the news network said, citing an analysis of data from the COVID Tracking Project. CNBC also reported that over the past seven days, the country reported an average of 69,967 new cases every day, the highest seven-day average recorded yet.

According to the Wall Street Journal, a team of researchers at Florida Atlantic University found in a study published in June in the journal Physics of Fluids that a well-fitted, multi-layer mask worked best at preventing droplet spread. They found that, of the readily accessible facial coverings they studied, a well-fitted homemade stitched mask comprising two layers of cotton quilting fabric was most effective for reducing the forward spread of droplets. The research was conducted using a mannequin’s head, an air compressor and a smoke generator that mechanically simulated a cough. Schumer says this kind of study—one that features even simple masks and shows them as effective COVID mitigation measures—reinforces the case to spend existing federal funds on an effort to better educate the public in a clear, non-partisan way.