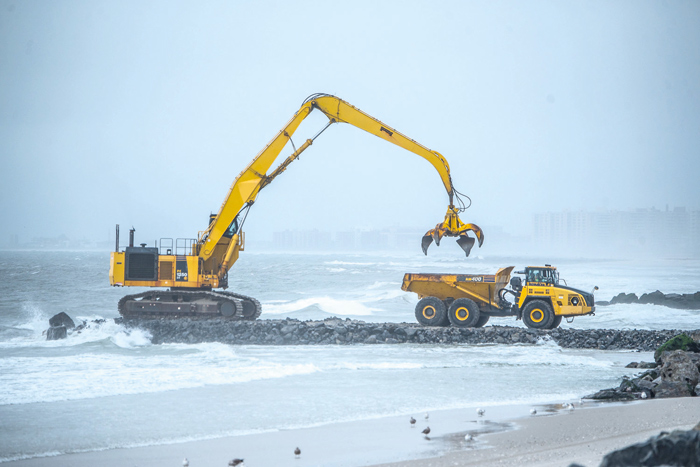 Construction crews have begun to work on the Rockaways-Atlantic Shorefront Project.

Mayor Bill de Blasio and, Gov. Andrew Cuomo joined the U.S. Army Corps of Engineers on Thursday to announce the start of construction on the Rockaways-Atlantic Shorefront Project, the $336 million initiative to strengthen the shoreline along six miles of the Rockaway Peninsula.

The corps-led project consists of a reinforced dune system designed to block storm surge and new and extended tapered groins. These stone groins are jetty-like structures extending out into the ocean intended to trap sand and reduce beach erosion and help maintain a critical natural buffer between the Atlantic Ocean and area communities.

According to officials, the first phase of the project will include the construction of 14 new stone groin structures and the rehabilitation of five existing groins on the Atlantic Ocean side of the Rockaway Peninsula. These new stone groins will provide stabilization for a re-nourished sand beach and dune and maintain the protective beach profile.

These improvements will also help restore local ecosystems and ensure the long-term viability of endangered species like the piping plover and sea amaranth. The high winds and fast-moving inundation caused by Superstorm Sandy disrupted the barrier island landscape that provides a home to local flora and fauna.

The second phase of construction will include the construction of a reinforced dune system that will strengthen the shoreline against coastal storms, which are growing more frequent and more destructive due to climate change. The dunes will be constructed with armor stone and steel sheet pile walls at their core, which will reduce wave breaking pressure and limit storm surge inundation and cross-peninsula flooding. All public access points across the dunes will be rebuilt using resilient materials.

The design of this project resulted from extensive analysis to determine best practices for a more resilient beach and shoreline as part of the U.S. Army Corps of Engineers’ East Rockaway Inlet to Rockaway Inlet, and Jamaica Bay Study, which was completed and released in 2018.

The corps awarded the construction contract to initiate this first major project phase to H&L Contracting LLC of Bay Shore, Suffolk County, for approximately $114 million. Work has begun on the contract with the construction of new groins in the Beach 30s.

The full Rockaways-Atlantic Shorefront Project is expected to reach completion within four years.

The Atlantic Shoreline component is the first of two U.S. Army Corps of Engineers major coastal infrastructure projects undertaken to strengthen Rockaway Peninsula. In close coordination with New York City and the State Department of Environmental Conservation, the corps is also advancing the Jamaica Bay component, which will involve constructing a system of berms, floodwalls, and nature-based features along the coastline in flood-prone communities bordering the bay. This project is currently in the preliminary design phase and has an estimated cost of $237 million.

“On the eighth anniversary of Superstorm Sandy, I am thrilled to see the start of construction on this much-needed coastal resiliency project that will help protect our communities from coastal flooding and beach erosion,” said State Sen. Joe Addabbo, Jr. (D-Howard Beach). “After witnessing the devastation of Sandy, I know we cannot afford to have another superstorm or hurricane inflict massive damage to our communities like Sandy did eight years ago. All of the aspects of this project will go a long way in safeguarding the beaches and coastal areas to the effects of climate change.”