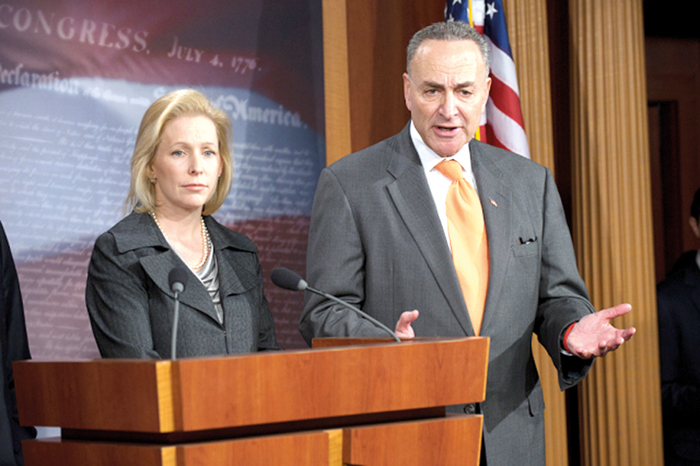 On the heels of a tweet by President Donald Trump urging Congress to pass a COVID relief bill, U.S. Senators Chuck Schumer and Kirsten Gillibrand demanded Senate Leader Mitch McConnell accept the mandate of the recent election and put a robust COVID relief bill on the Senate floor—ASAP—that delivers for the unemployed, renters, homeowners, small businesses, state and local governments, healthcare, schools and more. Schumer said this weekend’s tweet by President Trump is really a push on Leader McConnell to stop blocking relief that the nation—and New York—need right now.

“Instead of sending out this tweet, President Trump might have more success simply picking up the phone and calling the person who has been blocking COVID relief for months: Leader McConnell,” said U.S. Senator Charles Schumer. “The House passed the HEROES Act months ago, while democrats in the Senate have urged action. The only one who has refused to lift a finger on COVID relief, even refusing to take part in negotiations, has been Senator McConnell.”

“Unfortunately, President Trump, his administration, and Republicans in the Senate have not shown any kind of leadership during this crisis and have been unwilling to take real action to stem the spread of COVID-19,” said Senator Gillibrand. “Congress needs to get back to the negotiating table and start from where the HEROES Act left off – with a plan that helps our communities and families weather this storm and recover. The next COVID relief package must contain tools to tackle food insecurity, rental assistance, universal paid leave, and the fair and equitable distribution of a vaccine, once it’s safe and ready to go. Anything less than that is unacceptable.”

Schumer said that when the American people voted for a new President they were sending a message to the highest levels of government to take this pandemic more seriously and that needless inaction in the Senate by Leader McConnell must end. Schumer and Gillibrand made the case for a robust relief bill amid rising cases of the coronavirus both nationally and here in New York. They said New Yorkers need action now, especially if a second wave of the virus hits hard in the months ahead.

More than five months ago, the House passed the Heroes Act, which provided help to the unemployed, renters, small businesses, state and local governments and more, but it was blocked in the Senate by Leader McConnell. In October, the House passed another version of the Heroes Act, a smaller $2.2 trillion dollar bill. This was also blocked in the Senate, despite fervent efforts by Senators Schumer and Gillibrand.

Schumer said the Heroes Act is also laser-focused on health care issues that are at the heart of this pandemic and that it does something that’s vital: it strengthens Medicaid and improves access to health care coverage, support for hospitals. At a time when COVID is raging, health care money and Medicaid expansion should be at the very top of the list, Schumer said. He said the $2.2T Heroes Act should be the starting point for Congress, not an emaciated Senate bill that prioritizes protections for corporations and considers the needs of American families as an afterthought.