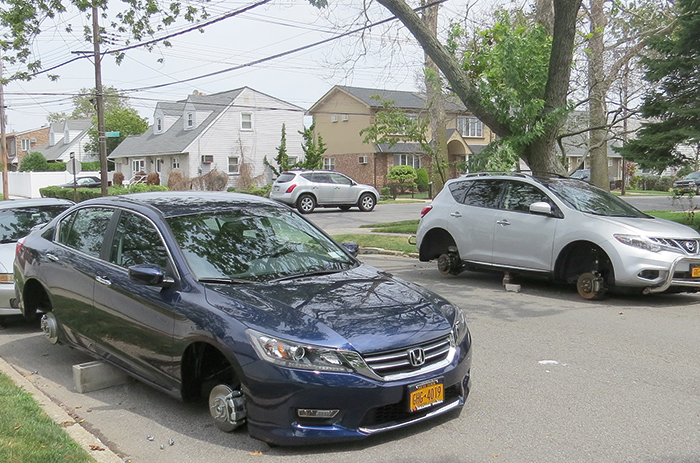 “This kind of thievery costs car owners thousands of dollars, but this crew is now officially out of business,” DA Katz quipped.

Two Queens men and one Brooklyn man have been variously charged with grand larceny and other crimes for allegedly stealing tires and rims from cars parked on streets in Queens, Queens District Attorney Melinda Katz announced Thursday.

The pit-stop style strippings occurred throughout the borough, and in the middle of the night, between November 2019 and May 2020, Katz noted.

Jonathan Pacheco, 30, is the main defendant and when it became known that he was wanted by police, he fled the state. Pacheco was apprehended in Pennsylvania and extradited to Queens last week to face charges. Pacheco’s co-defendants are fellow Queens resident Fabian Rodriguez, 33, and Jacob Martinez, 29, of Brooklyn.

According to the charges, on November 7, 2019, Pacheco is observed on video surveillance around

12:32 a.m. in the vicinity of 233rd Street in Oakland Gardens. He parked his Subaru directly across from a 2019 Honda Civic and with an unknown accomplice allegedly removed the lug nuts from the Honda’s wheels and took all four tires and rims. When the owner of the vehicle returned to the spot where he had parked his car, the Honda was propped on top of milk crates.

The accused ring of thieves repeated this scenario, with Pacheco driving throughout Queens in search of parked Hondas. Over the course of six months, the crew struck in Bellerose, Hollis, Forest Hills, Middle Village, Fresh Meadows, Flushing, Ozone Park, Richmond Hill, Glendale, Jamaica Hills, Bayside, Maspeth and Rego Park. Sometimes Pacheco worked with one or two co-defendants and sometimes with other unapprehended and unknown individuals.

Katz said on February 24, 2020, Pacheco and the two co-defendants along with an unapprehended other are observed on video surveillance parking their Subaru and Ford near a black 2019 Honda Accord at the intersection of 153rd and Reeves streets around 1:30 a.m. All three defendants allegedly participated in this theft. Martinez hauled milk crates from the Ford to the Honda and then carried two tires and two rims back to the Ford. Rodriguez also rolled a tire and rim to the waiting Ford. After all four tires and rims were removed from the Honda, Pacheco put the car jack back in his Subaru and the three defendants and an unapprehended other left the scene.

In all, the defendants allegedly stole up to approximately $42,000 worth of tires and rims.

“Under the cover of darkness, and armed with car jacks and lug wrenches, these defendants allegedly stole tires and rims from more than a dozen cars,” Katz added. “This kind of thievery costs car owners thousands of dollars, but this crew is now officially out of business.”