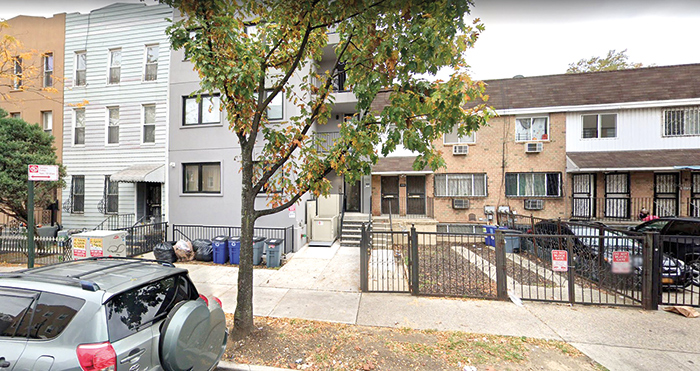 One of the many companies also named in the civil suit is 1178 Gates Ave. Inc., which is the address of the above building in Brooklyn.

The United States has filed a civil complaint in federal court in Brooklyn seeking damages and penalties against three individuals—including two borough residents—and multiple companies alleged to have engaged in a wide-ranging mortgage fraud scheme to defraud the government, federal prosecutors announced Monday.

The complaint alleges that Iskyo Aronov, of Middle Village; Ron Borovinsky, of Hollis Hills; and Michael Konstantinovskiy, of Roslyn Heights, and companies that they owned or controlled, engaged in fraudulent short sales of residential properties insured by the Federal Housing Administration of the U.S. Department of Housing and Urban Development. The suit is brought pursuant to the False Claims Act and the Financial Institutions Reform, Recovery and Enforcement Act.

Pursuant to HUD’s Pre-Foreclosure Sale Program, qualifying homeowners with defaulted, FHA-insured mortgages may sell their properties in a “short sale” for less than the balance of the mortgage if the sale is for the fair market value of the property. If a homeowner obtains approval for a short sale, the lender releases the mortgage after the short sale and submits an FHA insurance claim to HUD to cover the outstanding mortgage balance net of the short sale proceeds, plus approved costs and interest. HUD, in turn, pays the lender’s claim from federal funds.

Aronov was the founder, Chief Executive Officer and President of defendants My Ideal

As alleged in the complaint, from at least 2013 through 2016, the defendants defrauded HUD by manipulating the short sale process to acquire residential properties from numerous distressed homeowners for below-fair market value prices in non-arm’s-length transactions. The individual defendants used various corporate entities in furtherance of the fraudulent scheme. In the process, defendants made a host of material misrepresentations in critical transaction documents. As a result, defendants not only acquired the properties for below-fair market value prices, but obtained broker fees in the transactions and induced lenders to release the FHA-insured mortgages at a loss. In turn, HUD paid the lenders’ claims for FHA insurance from federal funds. These payments by HUD were artificially inflated as a result of the defendants’ fraudulent conduct.

The government’s complaint intervenes in a lawsuit originally brought by under the “qui tam” provisions of the FCA. Under the FCA, private citizens with knowledge of fraud against the government can bring a lawsuit on behalf of the United States and share in the recovery. The act also permits the government to intervene in such actions, as the government has done in this case.