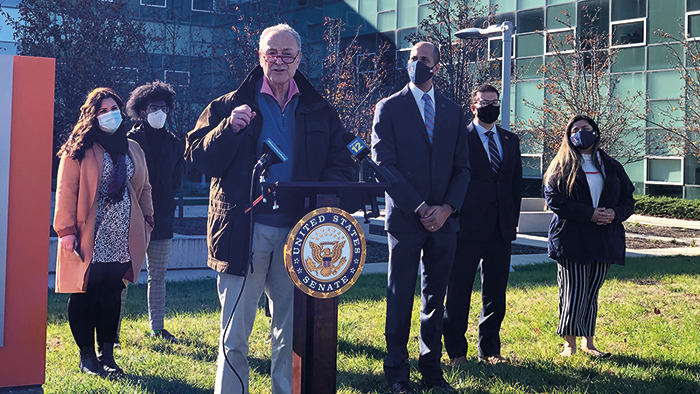 Brooklyn native and New York Sen. Chuck Schumer on Wednesday delivered his first speech as Senate Majority Leader. Below is a portion of those remarks:

“A few hours ago, on the West Front of this citadel of democracy, Joe Biden and Kamala Harris were administered the oaths of office to the Presidency and Vice Presidency of the United States. We have turned the page to a new chapter in the history of our democracy. And I am full of hope.

I would challenge anyone not to feel hopeful today after listening to Amanda Gorman, the amazing 22-year-old poet, wise far beyond her years, who told us that ‘Somehow we’ve weathered and witnessed; a nation that isn’t broken but simply unfinished.’

The hope she spoke about, a strong and happy hope —the hope we feel today—is a hope, of course, that’s tempered by reality. This was an inauguration unlike most others. The crowds that customarily line the National Mall were absent—a reminder that our nation is still in the throes of a deadly pandemic. The presence of thousands of national guardsmen, police, and Secret Service was a reminder that two weeks ago, in this very room, and on those very steps where President Biden took the oath, a mob of violent criminals tried to dismantle our democracy, our sacred democracy, brick by brick, and would try again if they could.

But as President Biden said a few hours ago: today, democracy has prevailed. The will of the people was heeded. The peaceful transfer of power fulfilled. It takes a lot more than a band of hooligans to bring our grand democracy down.

Let it be a message to our friends and adversaries around the world that our democracy—though it has been tried and tested—shall long endure.

And let it be a message to those terrorists who desecrated this temple of democracy that they will never prevail.

Today, the threat to our democracy from the presidency itself has ended, but the challenges we face as a nation remain. In the wake of violence and division, hatred and mistruth, in the shadow of disease and economic hardship, a warming planet and an unequal society, we begin the work of the 117th Congress.

In his Inaugural address, President Biden spoke to this moment—a moment of great challenge—and told us two simple truths. One, that our responsibilities are numerous. And two, it will take unity—unity of spirit, unity of purpose—to fulfill them.

President Biden: we heard you loud and clear. We have a lengthy agenda, and we need to get it done, together.”