Asif Raja, 54, is charged with one count of arson that carries a mandatory minimum sentence of five years in federal prison, with a maximum sentence of 20 years if convicted. 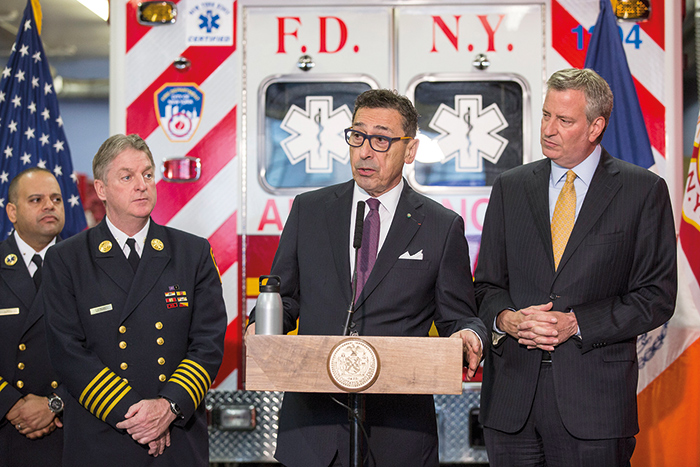 Photo Courtesy of Joanna Graham/Mayoral Photography Office
“We are extremely grateful that no one was injured during this incident and for the collaboration between all the law enforcement agencies involved in bringing this individual to justice,” Fire Commissioner Nigro said.

According to the City Fire Department, on Aug. 4, at approximately 10:15 p.m., firefighters were called to Ignited Restaurant & Lounge on Steinway Street near 30th Avenue for reports of a gas odor where they discovered a water condition from the sprinkler activation as well as small separate fires throughout the structure that were extinguished prior to their arrival. The incident was brought under control without any injuries to civilians or FDNY members.

Fire marshals responded to the scene and determined the fire to be suspicious in nature. An extensive investigation in cooperation with the Strategic Explosive and Arson Response Task Force of the Bureau of Alcohol, Tobacco, Firearms and Explosives led to the identification and arrest of Raja.

“We are extremely grateful that no one was injured during this incident and for the collaboration between all the law enforcement agencies involved in bringing this individual to justice,” Nigro said. “This arrest demonstrates the strategic value of this Joint Task Force and their ability to hold those that purposely set fires in this city accountable.”