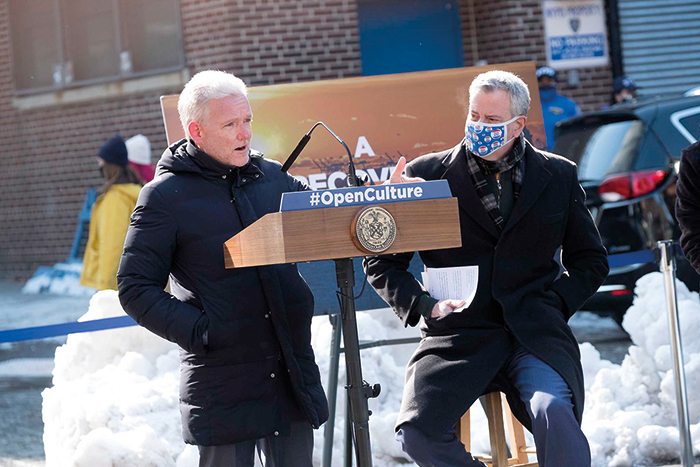 “Creating new spaces for artists to perform and be paid for their work is a step forward in keeping the arts in NYC,” Councilman Van Bramer said.

Modeled on the City’s Open Streets program, Open Culture is a new permit type available from the Mayor’s Street Activity Permit Office allowing for ticketed performances, rehearsals, classes, and workshops. Arts and cultural institutions, as well as entertainment venues, can secure a permit for single day, socially distanced performances at over 100 street locations throughout all five boroughs. Following the release of these draft guidelines, applications will open to eligible organizations March 1, 2021 and will extend through Oct. 31, 2021. Eligible organizations include:

“Arts, culture, and live events are the heart of New York City. Today, we’re bringing them back,” Hizzoner added. “From Open Streets, to Open Restaurants, to Open Culture, New York City has found creative and sustainable ways to connect New Yorkers to their neighborhoods while staying safe from COVID-19. I’m honored to support the cultural institutions that make our city great, and I can’t wait to see our creative community in action.”

“New York City can’t come back without the creative economy, which has been severely impacted by the pandemic with so many live music and performing arts venues unable to operate since March of last year,” said Anne del Castillo, commissioner of the Mayor’s Office of Media and Entertainment. “The Open Culture program allows people to safely experience our performing arts offerings while supporting the venues, cultural institutions and talented performers who make our great city the creative capital of the world.”

City Councilman Jimmy Van Bramer (D-Sunnyside) said, “Arts and culture are the lifeblood of New York City. I’m proud to have helped lead the effort to establish Open Culture and bringing dance, music, and comedy into the streets. Creating new spaces for artists to perform and be paid for their work is a step forward in keeping the arts in NYC.”

Taryn Sacramone, CIG chairwoman, executive director, Queens Theatre, added, “Members of the Cultural Institutions Group, as well as performing arts organizations throughout the city, and performers are all thrilled for the opportunities that Open Culture will provide. Artists will be bringing joy, beauty and unforgettable performances outside—safely. The diversity of the cultural community will be on display with streets turned into stages across all five boroughs. It’s a much-needed opportunity for artists to work and to connect with audiences, and something for all New Yorkers to look forward to—a reason for celebration!”