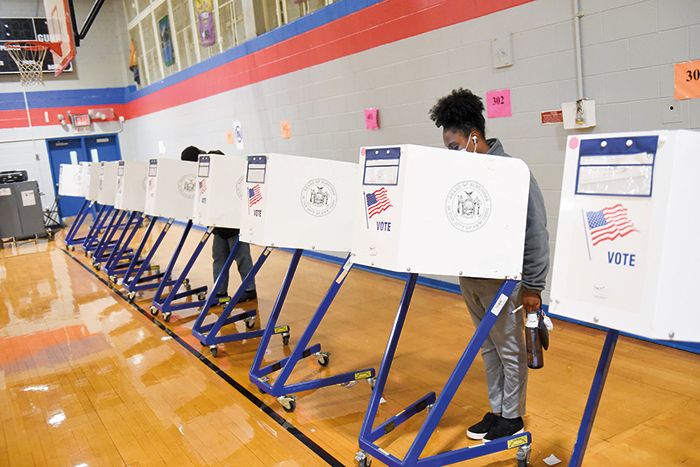 Congresswoman Grace Meng (D-Flushing) on Thursday announced that has she reintroduced legislation in the House of Representatives to lower the voting age in America to 16 years old.

Meng’s measure seeks to replace the 26th amendment to the Constitution with a new amendment that would allow 16- and 17-year-olds to vote.

“Our young people, including 16- and 17-year-olds, continue to fight and advocate for so many issues that they are passionate about from gun safety to the climate crisis,” Meng said. “They have been tremendously engaged on policies affecting their lives and their futures. Their activism, determination, and efforts to demand change are inspirational and have truly impacted our nation. It’s time to give them a voice in our democracy by permitting them to be heard at the ballot box. 16- and 17-year-olds are legally permitted to work and drive. They also pay federal income taxes. I believe that it is right and fair to also allow them to vote. Let’s let them be heard and make their voices count. Let’s give them a say in choosing who they want their government representatives to be. I’m proud to stand with our young people in introducing this legislation, and I urge my colleagues in the House to support it.”

Constitutional amendments require passage by two-thirds of the House and Senate, and ratification by three-fourths of the nation’s state legislatures. If enacted, the voting age would be lowered for federal, state and local elections.

“Generation Vote and our allies are firmly committed to advancing a new vision for the future of our democracy and what it means to engage young people in the electoral process in New York State and across the country,” said Brianna Cea, CEO of Generation Vote. “Lowering the voting age is an investment in the leaders of tomorrow and we are proud to endorse Congresswoman Meng’s amendment to extend voting rights to citizens who are 16 years of age. Empowering the next generation of voters makes our communities stronger, strengthens civic education in our schools, and recognizes the contributions of young people to improving our democracy. In the wake of unprecedented youth voter turnout in 2020 and in the lead-up to the 50th anniversary of the 26th amendment, we urge Congress to support this historic bill.”

“The National Youth Rights Association strongly supports Representative Meng’s constitutional amendment to lower the voting age to 16,” said Neil Bhateja, Board Member at the National Youth Rights Association. “When the government makes decisions about education, the environment, and war and peace, young people are affected for more years of their lives than any other age demographic. They work and are subject to taxation without representation: income tax, sales tax, payroll taxes, and more. In Scotland, Brazil, Austria, and Argentina, 16-year-olds have shown that they’re ready to vote and deserve to shape their own futures. The United States should continue its democratic tradition of extending voting rights.”