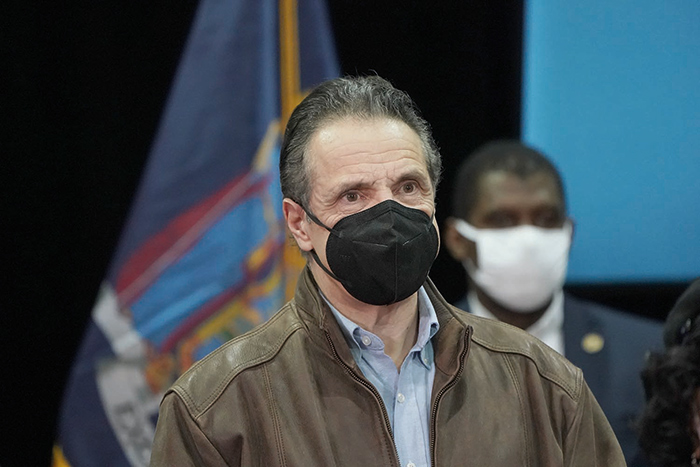 Photo Courtesy of Don Pollard/Office of the Governor

“I now understand that my interactions may have been insensitive or too personal and that some of my comments, given my position, made others feel in ways I never intended,” Gov. Cuomo said.

With a new Andrew Cuomo scandal seemingly emerging daily, area elected officials commented this week on the allegations and the political fate of the 56th governor of New York.

“I have always believed that elected officials are to be held to a high standard of ethics and conduct. Given the circumstances surrounding the governor’s actions relating to the handling of nursing homes during the COVID pandemic and the recent allegations from his former staffers of inappropriate sexual harassment, I support a full independent investigation by the attorney general to determine the facts and give the foundation for the state legislature to take proper actions. I share the anger and frustration of many of my constituents related to such actions by the governor,” State Sen. Joe Addabbo, Jr. (D-Howard Beach) said on Monday. “I support a number of legislative measures, which focus on addressing the governor’s situation, including the modification of the attorney general’s authority to assist in ensuring a credible, fact-finding independent investigation.”

Mayor Bill de Blasio seemed to be downright giddy as he called for investigations into his long-time political nemesis’s behavior.

“New Yorkers have seen detailed, documented accounts of sexual harassment, multiple instances of intimidation, and the admitted withholding of information on the deaths of over 15,000 people. Questions of this magnitude cannot hang over the heads of New Yorkers as we fight off a pandemic and economic crisis. It’s clear what must now take place,” Hizzoner said on Sunday. “The State Legislature must immediately revoke the governor’s emergency powers that overrule local control. In addition, two fully independent investigations must be held immediately into the deaths at nursing homes and the disturbing personal misconduct allegations. Precedence shows that investigations of the governor must be completely independent of his office. The investigation into nursing home deaths must be free to examine campaign contributions from the nursing home industry. And the investigation into sexual misconduct must be led by someone fully independent of the governor, not the former business partner of the governor’s top advisor. 2021 must be a year of progress and recovery. These efforts for transparency must be met.”

On Sunday, Cuomo issued his own statement.

“I never intended to offend anyone or cause any harm. I spend most of my life at work and colleagues are often also personal friends. At work sometimes I think I am being playful and make jokes that I think are funny. I do, on occasion, tease people in what I think is a good natured way. I do it in public and in private. You have seen me do it at briefings hundreds of times. I have teased people about their personal lives, their relationships, about getting married or not getting married. I mean no offense and only attempt to add some levity and banter to what is a very serious business.

“I now understand that my interactions may have been insensitive or too personal and that some of my comments, given my position, made others feel in ways I never intended. I acknowledge some of the things I have said have been misinterpreted as an unwanted flirtation. To the extent anyone felt that way, I am truly sorry about that.”