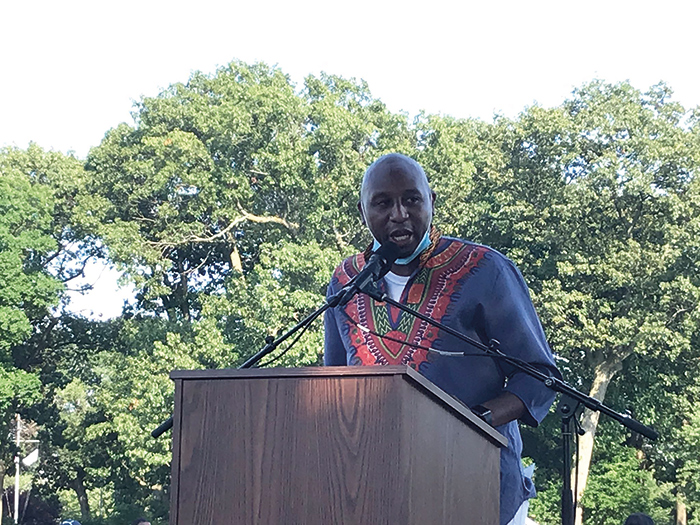 “We, as a borough, as a people, have an opportunity to choose how we define ourselves. As a borough, we will not stay down. Queens, we will rise,” Queens Borough President Donovan Richards said during his first State of the Borough address.

Queens Borough President Donovan Richards recently delivered his first State of the Borough address, detailing his administration’s accomplishments over its first 100 days, while also outlining Queens’ path out of the COVID-19 pandemic.

Richards presented his speech, titled “Queens Leads, Queens is Rising,” at the Museum of the Moving Image in Astoria and streamed it live on the borough president’s website and social media channels. The address, according to Richards, centered on rooting Queens’ recovery in true equity for all borough families and combating the existing injustices in healthcare delivery, economic development, transportation services, housing, and environmental policy in The World’s Borough.

These injustices are often exacerbated by the COVID-19 pandemic, Richards added.

“The state of our borough is not where it ought to be, for we have been decimated by the health pandemic, the economic crisis and racial injustices. But these issues do not need to define us,” the borough president said. “We, as a borough, as a people, have an opportunity to choose how we define ourselves. As a borough, we will not stay down. Queens, we will rise.”

Below is a breakdown of initiatives outlined by Richards in his address, including some that have already launched over the course of the Richards administration’s first 100 days:

Advocate for the construction of new hospital facilities in Queens to address the borough’s unacceptable scarcity of hospital beds.

Advocate for the creation of more community-based health centers that offer preventative medicine, limiting the strain on our borough’s already overcrowded emergency rooms. 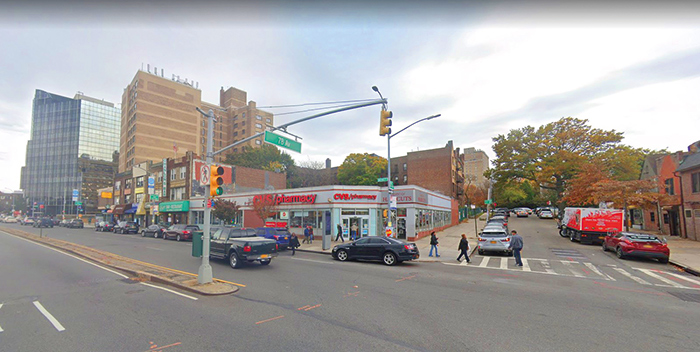 Photo Courtesy of Google
One of the many transportation initiatives that Richards outlined in his speech called for the completing the long-stalled redesign of Queens Boulevard in Kew Gardens.

Host town halls with the NYC Department of Small Business Services (SBS) to connect Queens businesses with all available tools to help them thrive.

Establish an Ombudsman within the Queens Borough President’s Office to oversee the quality of the borough’s recovery and rebuild.

Establish a Director of Nonprofit Opportunities within the Queens Borough President’s Office to assist community-based organizations in accessing new funding opportunities and resources from both the public and private sectors.

Create at least 2,000 units of truly affordable senior housing — identifying new locations for such developments, including on underutilized, city-owned property such as vacant land or parking lots.

Advocate for a partnership between the city and federal governments to purchase foreclosed homes, work with area nonprofits to refurbish them and help provide affordable houses to first-time homebuyers.

Encourage a doubling of the City’s investment in Community Land Trusts to give communities control over their land and keep local housing affordable.

Complete the long-stalled redesign of Queens Boulevard in Kew Gardens.

Create a two-way bike lane on the Queensboro Bridge.

Speed up the boroughwide rollout of Citi Bike.

Work with the City Department of Transportation to establish a Five-Borough Bikeway.

Establish additional busways along center medians of high-trafficked corridors such as Archer Avenue in Jamaica, along with all-door boarding, to speed up the commutes of thousands of Queens riders.

Call on the MTA to quickly convert its full bus fleet to all electric vehicles.

Expand the City’s Open Streets program in partnership with the NYC Department of Transportation, the NYC Department of Consumer and Worker Protection and the Street Vendor Project — prioritizing school campuses and communities lacking green space, while fast-tracking licenses for food vendors to operate there.

Encourage the City to increase funding for the NYC Commission on Human Rights’ Bias Response Team to help dispel and combat hate.

Call for the creation of a central database to allow for information sharing between relevant City agencies and law enforcement, better informing the City’s ability to address bias crimes.

Establish an Immigrant Welcome Center at Queens Borough Hall, connecting new and longtime residents of Queens alike to a wide variety of services in support of immigrant families.

Reestablish the Queens Solid Waste Advisory Board — a diverse group of residents and industry representatives tasked with advising the Borough President on issues such as waste, recycling, resiliency and environmental equity.

Leverage the Queens Borough President’s Office’s budget to invest in solar power and battery storage at city-owned buildings in Queens, making them fully green by 2030.

Ensure the full implementation of the Climate Mobilization Act.

Partner with federal and state entities to invest in long-term resiliency measures for Queens to defend against climate change.

Fight for a Green New Deal for our public housing developments.

Overhaul Queens community boards —prioritizing board diversity, member conduct, public engagement and the modernization of bylaws to deliver a long-overdue level of transparency for our 14 community boards.

Digitize the Queens community board application — resulting in a 56.5 percent increase in applications from last year.

Continuing to ensure the Queens Borough President Office’s Queens General Assembly, the Queens Immigration Task Force, the Queens Civic Engagement Committee, or any other convening body reflect the diversity of the borough.