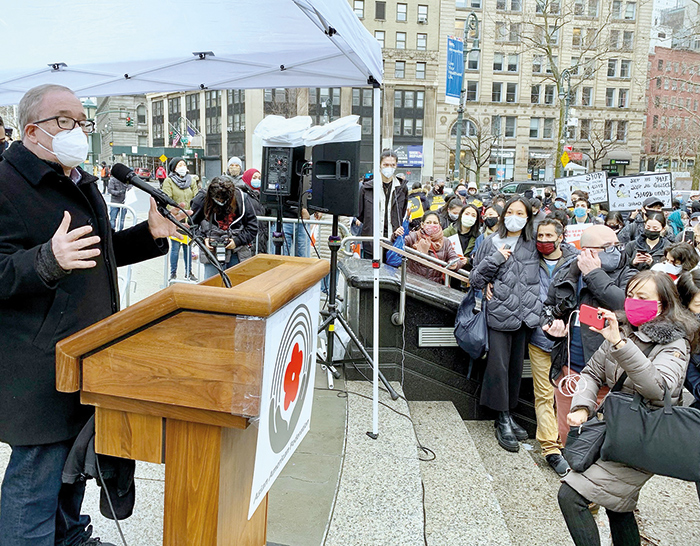 “Our city was already facing a mounting homelessness crisis before the pandemic hit, and COVID-19 has only exacerbated these challenges,” Comptroller Stringer said.

Despite extraordinary increases in spending for homelessness prevention and permanent housing, the homeless population in shelter has remained stubbornly high, resulting in rising costs for shelter and associated homeless services to meet the legal mandate to provide shelter, according to a new report released Wednesday by City Comptroller Scott Stringer.

Total spending for homeless services grew by 138 percent between fiscal years 2014 and 2020, rising to a total of $3.5 billion.

In FY 2020, spending on Family Shelter operations fell for the first time, by $24 million or 2.1 percent.  Overall spending grew by 8.7 percent, or $284 million, driven in large part by pandemic-related spending.

Since this time two years ago, the number of children in shelter has declined by 5,358 – a 24 percent drop.  Most of this reduction occurred during the pandemic period.

The single adult population has continued its steady growth.  There are now 8,208 more single adults in shelter than there were in March 2014, an 80 percent increase.

Most categories of homeless residents saw steep declines in shelter entrances in the first six months of the pandemic. Several factors likely explain the drop, including the eviction moratorium in place during the pandemic, federal assistance including unemployment benefits, and a fear of contagion.

The number of families with children entering shelter, which typically peaks in the fall at around 1,100, was roughly half that number in October of 2020.

The falloff was even more pronounced among Adult Families, declining from an average of over 100 per month, to under 50. Single Adult shelter entrants also fell, but less dramatically, to 1,470 in October 2020.

The report also highlighted indicators that could provide the public with useful information, but are not currently reported or only partially reported.

Stringer noted that he has urged the de Blasio administration to expand supportive housing that combines affordability with social services and is desperately needed to ensure homeless individuals and families can transition to independent living. Stringer also called on the City to direct housing capital investment toward the creation of affordable housing within the reach of extremely low and very low-income households.

“Our city was already facing a mounting homelessness crisis before the pandemic hit, and COVID-19 has only exacerbated these challenges,” Stringer said. “More New Yorkers are struggling and we need to meet this crisis with solutions that work. The City is spending more money than ever before on services that are supposed to help people overcome and prevent homelessness, but we are not seeing the reductions in homelessness that we should. We simply aren’t creating enough affordable and supportive housing to make a long-term difference in the lives of New Yorkers in need. We must ensure that every single dollar is being spent effectively and actually helping New Yorkers experiencing homelessness.”