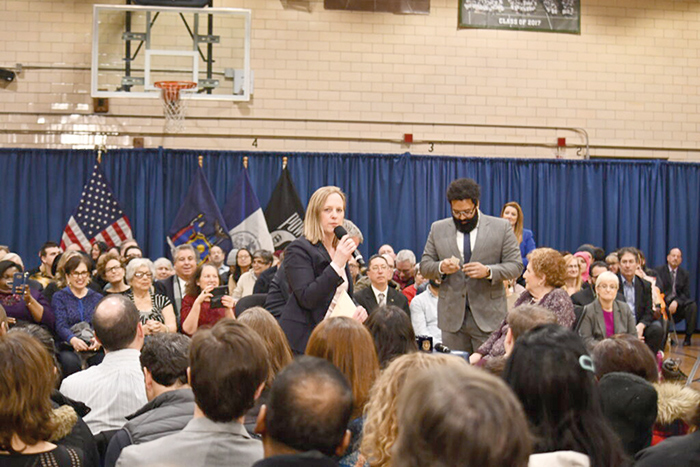 “I created the Human Trafficking Bureau in the DA’s Office to combat this very problem,” DA Katz said.

A Flushing couple has been indicted for allegedly bringing two female victims from Korea and coercing them to have sex with strangers for cash, Queens District Attorney Melinda Katz announced Thursday.

Jung Ja Ornstein, 62, and Eric Ornstein, 49, were both arraigned  on an 18-count indictment charging them with sex trafficking, promoting prostitution in the second and third degree, and grand larceny in the second, third and fourth degree.

According to the charges, in 2015, one of the victims read an advertisement in Korea that stated she could make money in America. The victim called the listed phone number and was told she would be working in a bar/restaurant but must pay back $10,000 for the transportation and assistance in obtaining a passport. When the woman arrived at JFK International Airport, she was met by Jung Ja Ornstein. This defendant took the victim to an address on Steinway Street in Long Island City and informed her that to pay off her bill she would be engaging in prostitution. Jung Ja Ornstein then allegedly took the woman’s passport and gave it to Eric Ornstein.

In March 2017, the defendants informed the victim that they would be relocating and returned the victim’s passport and left her alone.

The investigation revealed that another victim responded to a similar advertisement in Korea. This woman met with a man and woman in Korea and they assisted her in obtaining a passport and made travel arrangements for her. The victim was also told that she would have to pay back $10,000 for her travel, but it would be taken out of her earnings. After arriving in the United States, the victim was taken to a bar in Manhattan where her passport was taken from her and she was forced to work. While working at the bar, the victim was only allowed to keep her tips but she had to pay for her room and board. On tips alone, it was a struggle to also pay the $10,000 due for her travel. After about a year, this victim’s bill was purchased by another female who made the victim work in a massage parlor. Eventually, she was forced to work for the defendants.

The pair took the woman to the Steinway Street location and she, too, was allegedly forced to trade sex for cash. Jung Ja Ornstein again allegedly collected the money from the customers, who were arranged by Eric Ornstein. The victim was only allowed to keep her tips.

Continuing, the DA said, the victim worked for the defendants at several different massage parlors and in 2017, the victim was told that her debt was paid and they returned her passport.

Approximately three years later, the Ornsteins found the victim and allegedly informed her that she still had a bill to pay. The victim handed over $8,500 of her savings to the couple.

“I created the Human Trafficking Bureau in the DA’s Office to combat this very problem,” Katz said.

If convicted, the Ornsteins each face up to 25 years in prison.