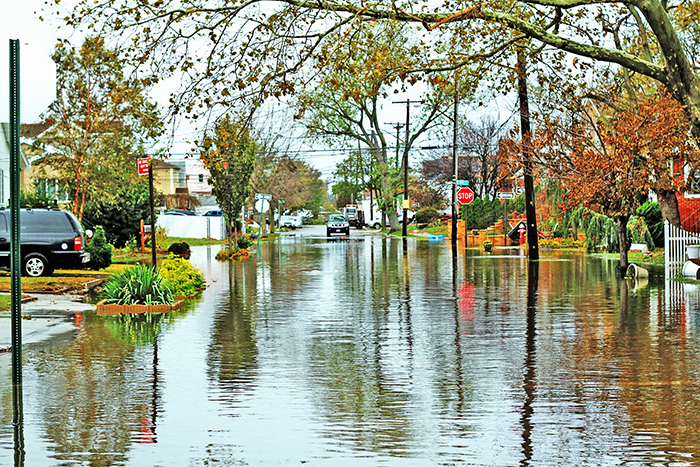 City Planning Commission Chair Marisa Lago today announced that the City Planning Commission approved Zoning for Coastal Flood Resiliency, citywide zoning rules that would result in all types of buildings being better able to withstand and recover from major disasters and sea level rise and which will also translate to lower flood insurance costs.

“ZCFR is a game-changer for the residents and businesses who call New York City’s floodplain their home. This citywide zoning overhaul is simultaneously broad and flexible enough to help our incredibly diverse communities and building types better withstand, and then recover more quickly from, storms like Sandy, as well as slowly rising sea levels. Thank you, ZCFR, for making our future and our city more sustainable,” said CPC Chair Marisa Lago.

The vote comes eight years after Superstorm Sandy struck city shores, killing 43 New Yorkers and leaving $19 billion in damage to homes and businesses. The proposal, which now moves to the City Council for review and approval, updates and improves on emergency rules established in the wake of Sandy, and makes them permanent. These changes will help to better protect the 800,000 New Yorkers, and tens of thousands of affordable homes, businesses and jobs, located in the current and future floodplain.

Currently, buildings are restricted by zoning regulations that do not take resiliency into account and thus force New Yorkers to choose between interior space and resiliency improvements. ZCFR will make it easier for buildings to meet or exceed modern resiliency codes without sacrificing their basement, for example, by adding some much-needed zoning flexibility. 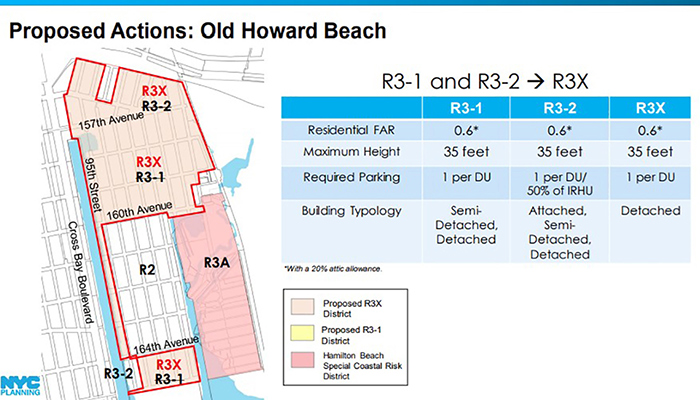 Courtesy of DCP
Additionally, the CDC has approved zoning changes in Old Howard Beach as part of the Department of City Planning’s Resilient Neighborhood Initiative.

For example, with ZCFR, a NYCHA or Mitchell-Lama complex in Lower Manhattan or Manhattan Beach will be able to construct an elevated mechanical building in its yard to address the needs of the entire campus. A single- or two-family homeowner in the Rockaways doing substantial rehab or building anew will be entitled to additional overall building height to elevate their structure above the Base Flood Elevation, established by the U.S. Federal Emergency Management Agency. An industrial business in the South Bronx will be allowed to build a mezzanine in buildings difficult to floodproof, giving them a space to safely store sensitive equipment or important files.

Critically, the proposal will also limit construction of new nursing homes in high-risk areas because of their vulnerable residents.

“These zoning changes will help make New York City’s coastal neighborhoods safer, stronger and better prepared for extreme weather. As climate change continues to worsen, it has never been more important to unlock new opportunities for New Yorkers who want to invest in the resiliency of their homes and neighborhoods,” said Jainey Bavishi, director of the Mayor’s Office of Resiliency. “We applaud the City Planning Commission for their support of this proposal and look forward to its consideration by the City Council.”

After four years of intense community-engagement, the proposed changes received support from most Community Boards and Borough Presidents. It’s the result of more than 200 public meetings the Department of City Planning held with New Yorkers since 2016, garnering ideas and feedback to develop and strengthen the plan.

In addition to ZCFR, the CPC approved zoning changes in three neighborhoods as part of DCP’s Resilient Neighborhood Initiative—Old Howard Beach in Queens and Gerritsen Beach and Sheepshead Bay in Brooklyn. These actions address resiliency challenges that are specific to the conditions found in these areas:

In Old Howard Beach, zoning changes are proposed to limit the construction of attached homes, which are harder to retrofit and elevate than detached homes because of their shared walls.

In Gerritsen Beach, zoning changes, including the establishment of a new Special Coastal Risk District, are proposed to limit future density and cap building heights at 25 feet above the flood elevation to more closely match the area’s built character.

In Sheepshead Bay, the existing Special Sheepshead Bay District would be updated to align it with ZCFR and prohibit below-grade plazas, which are prone to flooding.

The City Council will hold public hearings on all four these proposals, followed by votes later this spring.