According to a New York post report, a March 11 memo from JetBlue laid out a consideration for the airline to leave New York for “more abundant office space.”

At least two elected officials are calling on JetBlue airline CEO Robin Hayes and pushing him to keep JetBlue’s headquarters in Queens and the airline’s thousands of jobs in New York.

Amid a report saying New York’s “hometown airline” is weighing a move from its Long Island City headquarters to another location outside the state, Senate Majority Leader Chuck Schumer on Thursday made the case to Hayes to keep the 1,300-person Queens headquarter jobs, and the roughly 7,000 JetBlue employees who report to New York locations every day right where they are.

“JetBlue has always said it best: since their start up in 1998, to their first flight from JFK in 2000, their home, heart and soul have always remained in New York,” Schumer said. “The purpose of my call to Mr. Hayes was simply to remind him that JetBlue’s roots and its future are here in New York. With the critical pandemic relief dollars we just delivered on to help save airlines like JetBlue, and the thousands and thousands of New Yorkers they already employ, the airline should actually clear the runway to grow here, not recede. Bottom line, I am confident JetBlue will remain New York’s hometown airline for a long time to come.” 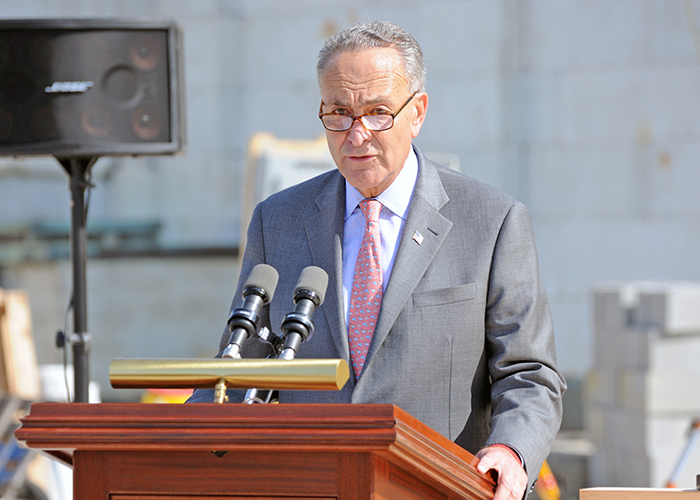 File Photo
“The purpose of my call to Mr. Hayes was simply to remind him that JetBlue’s roots and its future are here in New York,” Sen. Schumer said.

According to a New York post report, a March 11 memo from JetBlue said, “We are exploring a number of paths, including staying in Long Island City, moving to another space in New York City, and/or shifting a to-be-determined number of [headquarter] roles to existing support centers…..” The memo added, “We now have more leasing options as greater vacancy rates have changed the economics; the role of the office and our space requirements will evolve in a hybrid work environment; and our own financial condition has been impacted by COVID-19.”

“When JetBlue initially chose Kew Gardens and later Long Island City as the site of its corporate headquarters, it marked the beginning of what has become a deep and mutually-beneficial partnership between your airline and the borough of Queens. Let’s continue that partnership,” Richards wrote. “I understand the COVID-19 pandemic has placed significant strains on JetBlue and other airlines, and that emerging from the nadir will require difficult choices. But I know that it would be a long-term mistake for JetBlue to abandon its relationships and roots in Queens, thereby losing out on everything our borough and its residents can offer.”