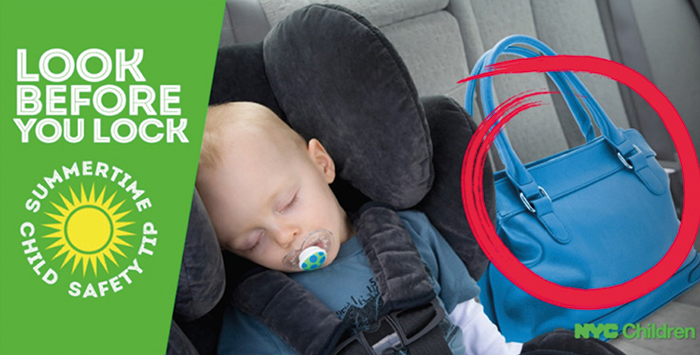 The City Administration for Children’s Services on Thursday launched its “Look Before You Lock” campaign, reminding parents and caregivers to never leave a child unattended in a car.

As the weather gets warmer, vehicles can heat up quickly, which can be extremely dangerous for children as their bodies heat up three times faster than an adult’s, according to the American Academy of Pediatrics.

According to ACS, heat illness occurs when the body cannot cool down. The most serious forms of heat illness are heat exhaustion and heat stroke. Heat stroke occurs when the body’s temperature rises quickly and can rapidly lead to death. Keeping cool can be hard work for the body. This extra stress on the body can also worsen other health conditions such as heart and lung disease.

According to the American Academy of Pediatrics, heat stroke is the leading cause of non-crash, vehicle-related deaths in children under 15. Infants and children up to four years of age are at the greatest risk for heat-related illness, according to the Centers for Disease and Control Prevention.

In addition to “Look Before You Lock,” a new report from Consumer Reports revealed that in 2020, almost 38 percent of hot car deaths were children who gained access to a vehicle on their own. ACS is reminding parents to be extra mindful about keeping car keys and key fobs out of children’s reach.

Throughout the summer, ACS officials said, the agency will be sharing important tips with families about how to prevent hot car tragedies from occurring. For instance, to prevent a harried parent from forgetting a child in the back seat of a car, one might leave necessary items in the back seat (purse, wallet, key fob, cell phone, house keys, etc.). Before leaving the vehicle, the driver may check the back seat to retrieve the item before locking the car doors. For other parents, it might help to place a stuffed animal in the front seat of the car every time their child is in the back seat. The stuffed animal will serve as a reminder that the child is in the car. As always, anyone who sees a child left unattended in a parked car, should notify law enforcement immediately or call 911.

“Under no circumstance should a child ever be left alone in a car; even if it’s for a short period of time. It’s critical that parents always look before you lock,” said ACS Commissioner David Hansell. “As the summer season draws closer and the days get warmer, we want all New Yorkers to be aware of the danger of hot cars and the steps they can take to help keep children safe.”