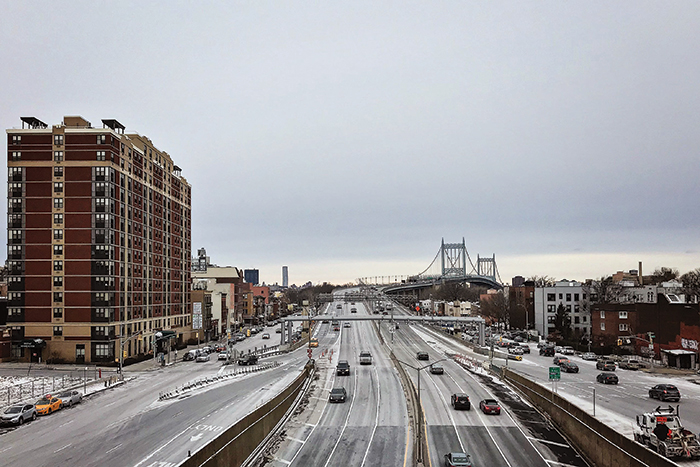 View of the BQE from Hoyt Avenue in Astoria.

Mayor Bill de Blasio and Department of Transportation (DOT) Commissioner Hank Gutman today released a comprehensive plan to extend the life of the Brooklyn-Queens Expressway (BQE) cantilever for at least another 20 years, while reimagining the corridor for a long-term future with less reliance on large, diesel trucks. The four-part plan focuses on preserving the structure; executing immediate and ongoing maintenance; expanding monitoring and enforcement; and developing a long-term, community-based vision for the entire corridor.

DOT has identified new ways to provide at least two more decades of life on the BQE from Sands Street to Atlantic Avenue in Brooklyn. These methods include:

Preservation methods will stop water infiltration to slow down corrosion. These methods will mitigate the intrusion of water into the structure by addressing the joints, improving drainage, and reintroducing waterproofing. This effort will be combined with rigorous, ongoing maintenance.

Starting on Aug. 30 and as recommended by the Expert Panel convened by the City in 2019, DOT will shift lane markings on the BQE along a half-mile segment (approximately from Atlantic Ave to the Brooklyn Bridge) from three lanes in each direction to two. DOT will replace current pavement markings of three sub-standard width lanes with two wider lanes and a shoulder, which will also allow for improved entry lanes at Atlantic Avenue. This will reduce weight along a critical segment of the structure, make the roadway safer, and reduce delays caused by breakdowns and collisions.

DOT will complete its ongoing concrete and rebar repairs on the Hicks Street retaining wall this year. Work on two deck spans showing faster signs of deterioration will begin next year.

The City has installed sensors along the BQE to continuously monitor the structure’s health. Preliminary results will be available later this summer; full results should be available by next spring. These sensors will provide a real time picture of how the structure is behaving under traffic.

“This plan is designed to address current safety and structural concerns about the 70-year old roadway, while reimagining not only its future purpose, but how freight is moved in this city in the 21st century,” said DOT Commissioner Hank Gutman.

“Brooklyn’s only interstate highway, the BQE-278 corridor will cost billions to repair, reimagine and replace, and federal infrastructure funding will be key. But we have to get it right. Buying time now — by making needed repairs, lessening the heavy loads and putting in place ongoing monitoring to ensure it remains safe — is crucial as we engage communities along the corridor to find the best answers for a 21st Century solution. I want to thank the Mayor and DOT Commissioner for a path forward, and my state elected colleagues Assemblywoman Jo Anne Simon and Senator Brian Kavanagh for legislation to enforce overweight truck rules and to begin a new governance model to ensure better state, city and federal collaboration on the task of transforming the BQE. We all need to work together to shift how freight is moved. We can build on strategies for lighter more environmentally friendly vehicles and take advantage of the USDOT MARAD-designated East Coast Marine Highway to increase waterborne options and develop green ports and rail connections which will go a long way in environmental and infrastructure dividends. Government must work together at all levels to make it happen and I want to thank the City for initiating the collaboration across agencies and levels of government,” said U.S. Rep. Nydia Velázquez (D-Queens, Brooklyn, Manhattan).

“The Brooklyn-Queens Expressway has blighted New York City for decades, dividing and dehumanizing neighborhoods while spewing toxic pollution into our lungs and generating oppressive noise levels for all those who live and work in its vicinity. Today’s announcement to scale back the BQE, as I have long advocated, is a positive first step toward ending the harmful legacy of this roadway and finally creating the flexibility and space to comprehensively reimagine a pedestrian-friendly transit and infrastructure network for the future.

“I am also encouraged by the corridor-long community planning process that, if implemented meaningfully, will engage New Yorkers from Queens to Staten Island in re-envisioning how we move as a city. A real planning vision for the corridor, rather than a piecemeal rehabilitation, is the best hope we have to tap into the federal and state investment that our transit infrastructure so desperately needs.

“We must seize this opportunity to pave a green path forward for our city – one that puts people over cars and public space over pollution.”