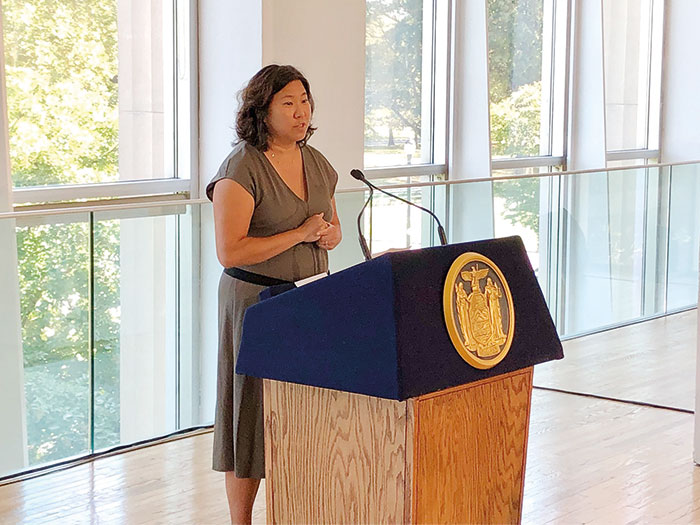 “Our government must be there to support those who desperately need help, and that includes EVERYBODY who requires relief,” Rep. Meng said.

Congresswoman Grace Meng (D-Flushing) on Tuesday called for federal disaster relief to be accessible to undocumented New Yorkers who have been devastated by the remnants of Hurricane Ida.

In a letter Meng led to the head of the Federal Emergency Management Agency, the congresswoman asked Administrator Deanna Criswell to use the agency’s legal authority to expand the immigrant eligibility requirements for disaster relief assistance, so that all who have been impacted by the storm can seek help regardless of immigration status.

Meng’s correspondence follows Gov. Kathy Hochul’s announcement Monday to make $27 million available for undocumented New Yorkers affected by Ida. Meng, who joined the governor for the announcement at the Queens Museum, said in her remarks during the event that she would be sending her letter to FEMA this week, noting that states should not be left to pick up the tab for a federal disaster relief program.

“The destruction that Ida caused throughout our region has been devastating,” said Meng. “Queens, and my district in particular, which includes many immigrant communities, was among the hardest hit spots, and lives have been turned upside down. Our government must be there to support those who desperately need help, and that includes EVERYBODY who requires relief. With so many people distraught and shattered by the damage from the storm, it is more important than ever for our immigrant communities to not be left behind or forgotten about. Ensuring relief for those who are ineligible is the right, decent and compassionate thing to do. I commend Governor Hochul for making aid available from New York funds; but as I said, states should not be left to pick up the tab for a federal disaster relief program.”

Those who lack such identification do not have access to FEMA’s disaster relief, and there are few resources for disaster victims outside of FEMA assistance. The Individuals and Households Assistance Program was designed to meet individuals’ and households’ basic needs, particularly those that have uninsured or underinsured necessary expenses. This will be the central challenge as many non-qualifying immigrants search for new shelter, recover and restore their belongings, and seek medical care. We strongly believe FEMA should ensure relief is accessible regardless of immigration status,” Meng wrote in her missive to Criswell. “FEMA cites Title IV of the Personal Responsibility and Work Opportunity Reconciliation Act of 1996, also referred to as the Welfare Reform Act, for its immigrant eligibility standards for receiving federal public benefits. However, there is precedent for agencies independently determining whether their relief programs constitute a federal public benefit. For example, in the case of Herrera v Metropolitan Life Insurance Company et al, a federal district court held that proceeds from a Federal Employee Group Life Insurance policy did not constitute a federal public benefit, thus allowing a nonqualified alien beneficiary to receive the proceeds. Given the court’s interpretation that the Welfare Reform Act was intended to restrict eligibility only for welfare benefits available to the public at large, we believe FEMA has the authority to interpret the law in a manner that allows disaster relief to be available regardless of immigration status.”