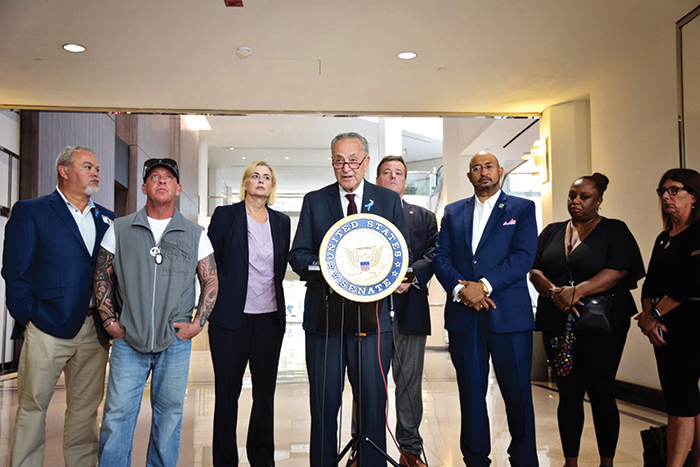 “We need the program and the funds to keep pace with treating and monitoring 9/11 responders and survivors,” Schumer said.

Standing with 9/11 advocates, including John Feal, and with support from leaders across New York and Long Island, U.S. Senator Charles Schumer on Sunday announced a push to remedy a $3 billion gap for the 9/11 first responders health fund. Schumer said that even 21 years after the attack many New Yorkers are still getting sick, finding out that they have been diagnosed with a 9/11-related cancer or other health problem(s).

Schumer said that it is widely known that the World Trade Center Health program (WTCHP), which helps pay for those diagnosed with related conditions, will need $3 billion dollars to keep pace with rising need. Schumer detailed his plan to solve the funding dilemma before it becomes a crisis and detailed his plan to attach the funds to the end-of-year federal budget bill.

Schumer, who has a long and accomplished history of both advocating and delivering for those impacted by the 9/11 attacks, said that we owe it to our September 11th heroes to ensure the health program meets its needs. He said this effort can—and should be—bipartisan. Advocates also spoke.

“We have seen the toll a funding crisis takes on our 9/11 heroes and those made sick by the despicable attack on New York 21 years ago,” said U.S. Senator Charles Schumer. “So, I am here, joined in support by so many friends and selfless advocates to say that we must address the World Trade Center Health Program funding issue as soon as possible.”

“We need the program and the funds to keep pace with treating and monitoring 9/11 responders and survivors. The science is clear: it can take decades for the health consequences of 9/11 to manifest in a person who responded, or worked near Ground Zero. We owe it to all New Yorkers impacted by this attack to meet their health needs and do all we can to try and help them get better—and that begins with providing the funds,” Schumer said.

“For years, I have worked side-by-side with first responder unions, the building trades and other worker advocates to secure the money needed to fully fund the 9/11 health programs, and it has not always been easy. Some of the efforts were even painful—to watch former NYPD Det. Louis Alvarez trek to Washington, spending his last days fighting for funds—we must and we can fix this issue before it becomes a crisis, and so I urge the Senate to come together on this issue with bipartisan support and help us solve this problem via the end-of-year budget,” Schumer added.

Schumer announced that he will use legislative language that already exists, authored by his New York colleague, Senator Kirsten Gillibrand, to address the $3 billion funding gap in the upcoming omnibus. Gillibrand backs this plan and told the Daily News on Friday that, “Without this funding, more than 118,000 responders and survivors currently enrolled in the program could see their access to treatment affected, and those seeking treatment in the future may not be able to receive it at all.”