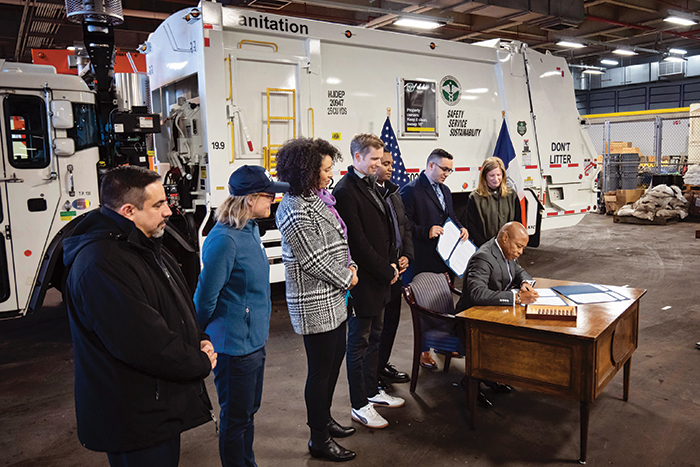 The laws, Adams noted, will create rat mitigation zones to build on successful mitigation efforts, codify Adams’ recent announcement to drastically reduce the time that trash sits on city curbs, and reduce rats in construction areas and other buildings with large rodent infestations.

Adams signed the following bills into law on Friday:

Two weeks ago, Adams announced $14.5 million in new funding this fiscal year for the ‘Get Stuff Clean’ initiative to clean more than 1,000 “No Man’s Land” neglected areas around the city, increase litter basket service, expand camera enforcement against illegal dumping, and bring on additional rat exterminators — resulting in faster and more reliable cleaning of every corner of the city.

“Today I’m proud to sign four bills to help create a cleaner and more welcoming city for New Yorkers,” said Adams. Last month, I announced a once-in-a-generation change to reduce the amount of time black bags sit on the curb and just last week we announced our ‘Get Stuff Clean’ initiative. This legislation doubles down on our efforts and is another important step to put a dent in our rodent population. Rat-free streets are vital to vibrant neighborhoods and our city’s economic recovery, and I thank the City Council for their partnership in keeping our city squeaky clean.”

“Everywhere I go, people say thank you for prioritizing the cleanliness of our neighborhoods and I always tell them the same thing – I couldn’t do it without our sanitation workers, without our mayor, and without our partners on the City Council, many of whom have made this a priority after too many years of letting cleanliness fall by the wayside,” said City Department of Sanitation Commissioner Jessica Tisch. “The bills signed into law today will make a meaningful difference in the appearance of our city and in its recovery.”

City Department of Health and Mental Hygiene Commissioner Dr. Ashwin Vasan added, “Every New Yorker has the power to promote a rat-free New York City and these bills will support residents and make our neighborhoods cleaner. Rat mitigation zones give rats no safe quarter, and the tools in these bills empower all of us send rats packing!”