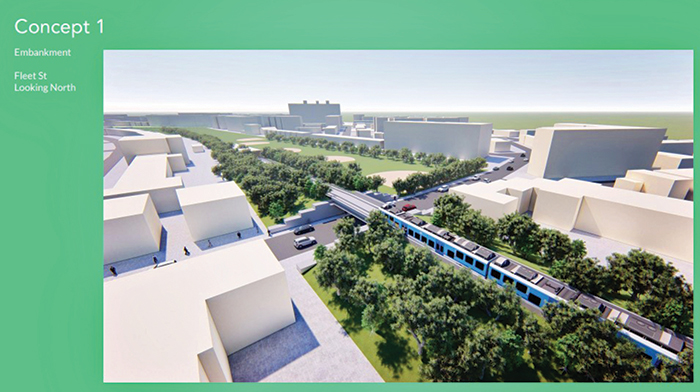 A bipartisan, transportation-minded triumvirate in the City Council is looking to drum up support for the QueensLink project via legislation.

The QueensLink looks to provide a new north-south transit connection in The World’s Borough while also using available land for new park space—and, perhaps most importantly, stand as a viable option to the Adams administration-backed QueensWay project.

At issue is the long-abandoned Rockaway Beach Rail Line of the Long Island Rail Road—a 3.5-mile, 47-acre swath of the borough that runs from Rego Park to Ozone Park. For the past several years, the debate over what to do with the lengthy span of abandoned rail track—and elevated eyesore—has come down to QueensWay vs. QueensLink: park land vs. public transportation.

Proponents of the QueensLink are devoted to the reactivation of the Rockaway Beach Rail Line either as part of the Long Island Rail Road or, more likely, the City subway system. The defunct spur was put into service in the late 19th century under the control of the LIRR and connected Rockaway and southern Queens with Rego Park, provided area residents with expedient access to other parts of the city, and 40-minute commutes to Midtown Manhattan from the Rockaway Peninsula.

As of Wednesday afternoon, Res. 0390-2022 had been referred to the Council Committee on Transportation and Infrastructure.

In September, Mayor Eric Adams announced a $35 million investment for design and construction of the Metropolitan Hub in Queens, or Phase One of the QueensWay. According to Adams, this phase of the project will transform a vacant, city-owned corridor in Forest Hills into a five-acre park with 0.7 miles of greenway, providing residents with new open space, improved access to recreational amenities, outdoor education opportunities for students, and a safe transportation corridor connecting people to schools, businesses, and 10 bus lines. The City Economic Development Corporation will manage the construction of the Met Hub in collaboration with the New York City Department of Parks and Recreation (NYC Parks). The funding includes $2.5 million from the New York City Council.

Adams has publicly admitted he’s a fan of the QueensWay project, and sees it as the High Line of The World’s Borough.

“New York is a five-borough city, and every borough deserves high-quality park space. That’s exactly what we are delivering with this $35 million investment in one of our vital neighborhoods in Queens,” Adams said. “QueensWay phase one will convert abandoned railroad tracks that have been used as a dumping ground into a linear park that will make this community safer, healthier, greener, and more prosperous. The community has been asking for this for decades, and I am proud to stand with them to show how we ‘Get Stuff Done’ for New Yorkers.”