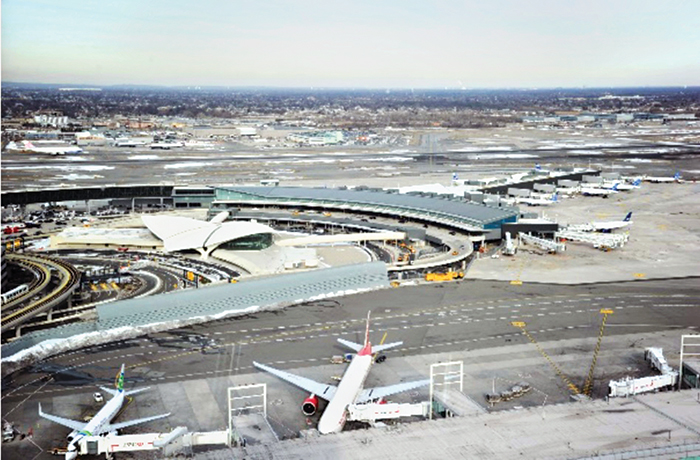 The $400 million, privately financed expansion and modernization will allow British Airways to move from its long-time home in Terminal 7 and co-locate with American Airlines in Terminal 8.

Governor Kathy Hochul, the Port Authority of New York & New Jersey, American Airlines and British Airways on Tuesday announced the opening of a newly expanded Terminal 8, marking completion of the first phase of the historic JFK Vision Plan that is transforming the international airport into a world-class global hub.

The $400 million, privately financed expansion and modernization will allow British Airways to move from its long-time home in Terminal 7 and co-locate with American Airlines in Terminal 8. The 60-year-old Terminal 7 will be demolished to clear space for a new Terminal 6 that will begin construction early next year.

Operational enhancements of Terminal 8 include five new widebody gates, four new widebody parking positions, and an expanded and upgraded baggage handling system that will together support additional transatlantic flights. The terminal has also been expanded with approximately 130,000 square feet of additional and refurbished space.

Terminal 8’s expansion is a critical component of the JFK Vision Plan that is transforming the airport into what will be one of the world’s finest international gateways with a 21st century customer experience and increased connectivity for travelers. The move by British Airways will bring the storied carrier closer to its partner airlines when Terminal 8 becomes home to eight oneworld® Alliance carriers. Iberia plans to move into Terminal 8 on Dec. 1, and Japan Airlines expects to move its operations to Terminal 8 in May 2023.

According to officials, premium customers traveling on both airlines will now be able to enjoy an elevated travel experience at Terminal 8. Upon arrival, premium customers will be greeted at the brand new co-branded premium check-in area, which will provide personalized, concierge-style service. Thoughtfully designed architectural elements also define an exclusive check-in space for eligible customers.

Once through security, three distinctive lounges; Chelsea, Soho and Greenwich, combine the best of both brands and provide a refined, welcoming pre-flight experience for eligible customers based on cabin of travel and loyalty program status. The two brand new lounges — Chelsea and Soho — have been designed with original high-end finishes, evoking a unique sense of space while elevating the experience and service offered to every guest.

Terminal 8 will also be undergoing a major concessions upgrade across the terminal over the next 18 months, including locally-inspired food and beverage options.

The co-location of American Airlines and British Airways at Terminal 8 supports the Port Authority’s mission to create greater connectivity for passengers at a transformed and more unified JFK.

The Terminal 8 project involved the work of more than 115 unique minority- and women-owned businesses that were awarded contracts totaling more than $161 million, exceeding the Port Authority’s commitment to at least 30 percent MWBE participation at the agency’s capital projects. Local businesses were awarded nearly $33 million in contracts at Terminal 8.

“The successful redesigning and reimagining of Terminal 8 is just one of the ways we have been making real progress toward making JFK the single greatest airport in the world. Along with new gates, new amenities, and new lounges, the upgrading of Terminal 8 has also brought new employment and contracting opportunities for Queens residents and businesses,” Queens Borough President Donovan Richards Jr. said.