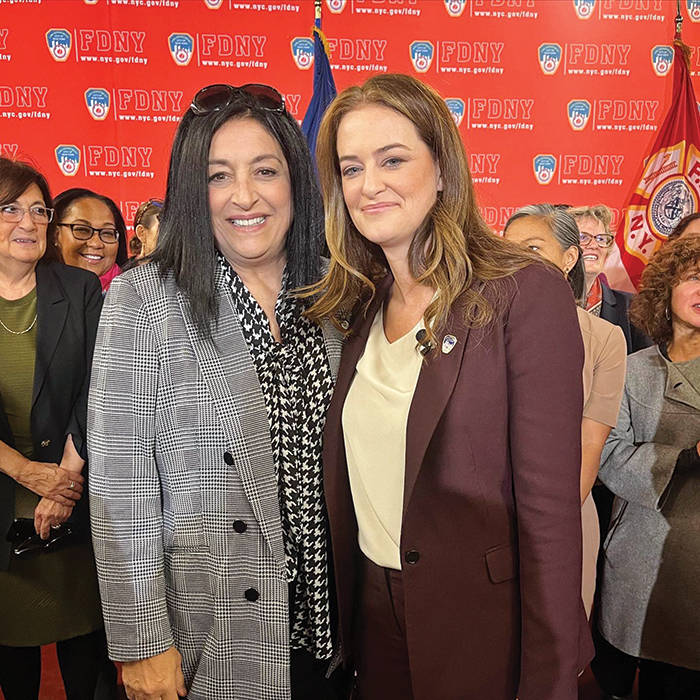 Mayor Eric Adams on Monday signed a package of five bills to improve diversity within the City Fire Department—not even a month after the City Council voted in favor of instituting laws aimed at addressing recruitment and retention of underrepresented groups within the department, as well as requiring the implementation of diversity, inclusion, anti-discrimination, and anti-harassment training of the Bravest.

On Monday, Adams signed into law the following five bills:

Intro. 516-A — sponsored by Council Speaker Adrienne Adams — establishes a recruitment and retention plan for firefighters. The bill requires the FDNY, in consultation with the New York City Department of Citywide Administrative Services (DCAS), to develop and implement a plan to recruit and retain individuals from underrepresented populations within the rank of firefighter.

Intro. 519-A — sponsored by Councilwoman Joann Ariola — requires a survey of permanent firehouse upgrades to establish a working environment that facilitates use by a mixed-gender workforce. The bill requires the FDNY to survey each firehouse to determine the permanent facility upgrades necessary to facilitate use by a mixed-gender workforce. Upon completion of the survey, the FDNY will then submit a report on the findings of the survey detailing permanent facility upgrades necessary at each firehouse, the feasibility of implementing such upgrades, and any construction plans to make such upgrades.

“I am proud to sponsor legislation that will lead to upgrades for our fire houses to have adequate areas for both men and women to tend to their personal needs,” Ariola added. “I will continue to fight for the members of the FDNY in every aspect of their job.”

Intro. 553-A — also sponsored by Riley — requires the FDNY, in consultation with DCAS, to develop and implement a plan for providing ongoing training and education to all employees regarding diversity and inclusion, including training on the department’s anti-harassment and anti-discrimination policies. FDNY will also be required to post an annual report on its website regarding efforts taken to implement such training.

Intro. 560-A — sponsored by Councilwoman Nantasha Williams — requires the FDNY to submit an annual report on complaints filed with the department’s Equal Employment Opportunity office regarding potential violations of the city’s Equal Employment Opportunity policy. The report will include information on the number of complaints that resulted in corrective action taken by the FDNY, further disaggregated by the form of corrective action, including, but not limited to, formal reprimands, fines, loss of pay or benefits, transfers, suspensions, demotions, and terminations.

“Diversity is at the heart of our city’s strength, and our commitment as an agency is first and foremost to the people we serve. The FDNY will set the bar for the fire service by attracting the best talent this city has to offer, serving each neighborhood as though it was our own, and ensuring each member of our FDNY family can thrive, grow as leaders, and inspire future generations,” said FDNY Commissioner Laura Kavanagh. “Mayor Adams, Speaker Adams, and the City Council are true partners in that mission, and I look forward to working closely with them to achieve it.”