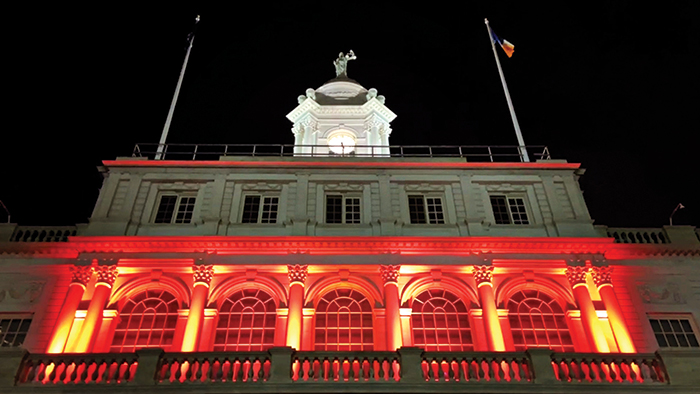 City Hall is lit orange on Monday to honor the 16 Days of Activism Against Gender-Based Violence.

Intro. 153-A amends the City’s administrative code by establishing a housing stability program for survivors of domestic and gender-based violence.

Intro. 154-A amends the City’s administrative code by requiring the Mayor’s Office to End Domestic and Gender-Based Violence (ENDGBV) to create an online services portal and guide.

Intro. 153-A — sponsored by New York City Councilmember Tiffany Cabán — would require ENDGBV, in consultation with the New York City Department of Social Services (DSS) and community-based organizations, to establish a program to provide survivors of domestic and gender-based violence with a low-barrier grant and supportive services that would help survivors with expenses related to maintaining housing. The bill would require ENDGBV to report on the program on an annual basis. The legislation also updates the definitions section used in this section of the code.

Intro. 154-A — also sponsored by Councilmember Cabán — would require ENDGBV to establish an online portal and a written resource guide of available services for survivors of domestic or gender-based violence in New York City. The portal and guide would be aligned with ENDGBV’s NYCHope and be available in the designated citywide languages. The guide would also be available in Braille. The portal would include a clear and conspicuous link to any other relevant city-run websites and portals that provide information on survivor services located within the city and a description of the types of such resources. Finally, the bill would require ENDGBV to conduct outreach on the portal and guide and to ensure the portal is secure and confidential to protect the privacy of survivors.

“When I first became chair of the Committee on Women and Gender Equity, I shared that my focus this term would be on shifting resources and power away from patriarchal systems of violence and punishment and toward the compassionate, life-giving systems which we have sidelined and devalued for too long,” Cabán added. “I am very proud to be delivering on that promise with the two bills the mayor is signing today. These two laws will save lives. The online portal and written resource guide, available in all major languages and in Braille, will make it much more likely that survivors will know about, and take advantage of, the great life-saving programs already available in our city. And the low-barrier urgently accessible grant program will directly address one of the most significant barriers survivors face in leaving dangerous situations: economic precarity. I look forward to working with the mayor to fully fund and thoughtfully implement these laws and can’t wait to celebrate many survivor success stories together.”