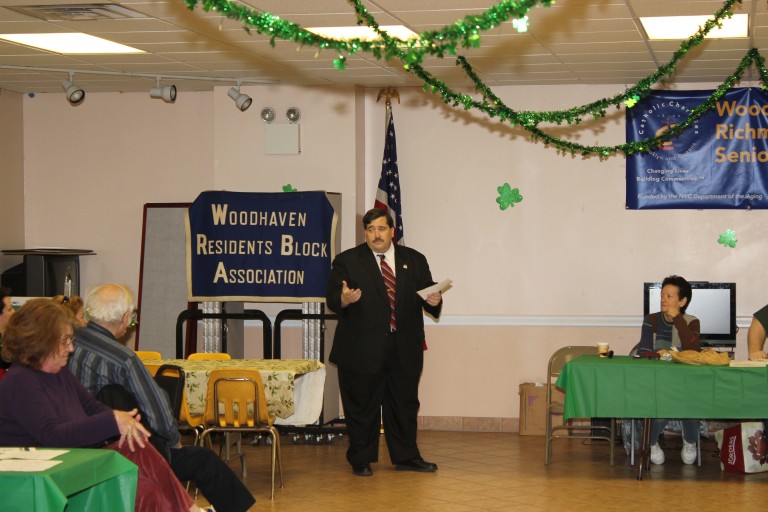 After the fatal beating of Anthony Collao last week, the Woodhaven Residents Block Association (WRBA) spent much of its meeting discussing the problems that come with abandoned homes.

Collao was killed after a group of teens (of which three are reportedly from Woodhaven) crashed a party being held at an abandoned house on 90th Street.

WRBA President Ed Wendell said abandoned homes are becoming a serious issue. On February 20, an abandoned home on 98th Street caught on fire and damaged a neighbor’s house. There was also a house on 90th Street that residents complained was frequented by drug using teens. The Department of Buildings subsequently sealed the home.

“People are going to start moving, and nobody seems to care,” one resident shouted during the meeting.

Wendell said the community might try partnering with various groups, such as local Boy Scout troops, to clean abandoned homes that are plagued with graffiti. But cracking down and finding permanent solutions is a complicated issue.

Wendell said because of problems with foreclosures, no one is certain who is responsible for the house. He also said some homes are occupied, but the residents don’t care about maintaining the property.

Another related issue is growing noise complaints in the area. Abandoned homes are popular spots for parties, and some residents throw parties in legal properties on a weekly basis.

Maria Thomson, President of the 102nd Precinct Community Council, said officers assured her they would become more aggressive on the issue.

Local politicians stopped by to update residents on how they are fighting for the community.

Miller also discussed graffiti issues in the neighborhood. “If we all fight it the minute we see it, the graffiti will disappear,” he said.

Councilwoman Elizabeth Crowley (D-Middle Village) said Mayor Michael Bloomberg is “out of his mind,” because of his insistence on threatening firehouses and putting the public safety of New Yorkers in jeopardy during every budget negotiation was becoming tiresome.

Bill S.3901 will create a 500 foot “buffer zone” for protests at military funerals.

“You can’t stop protests, but you can certainly have limitations. Especially for those who lost lives protecting these freedoms,” Addabbo told The Forum.

The bill easily passed the Senate with 60 Senators voting in favor.