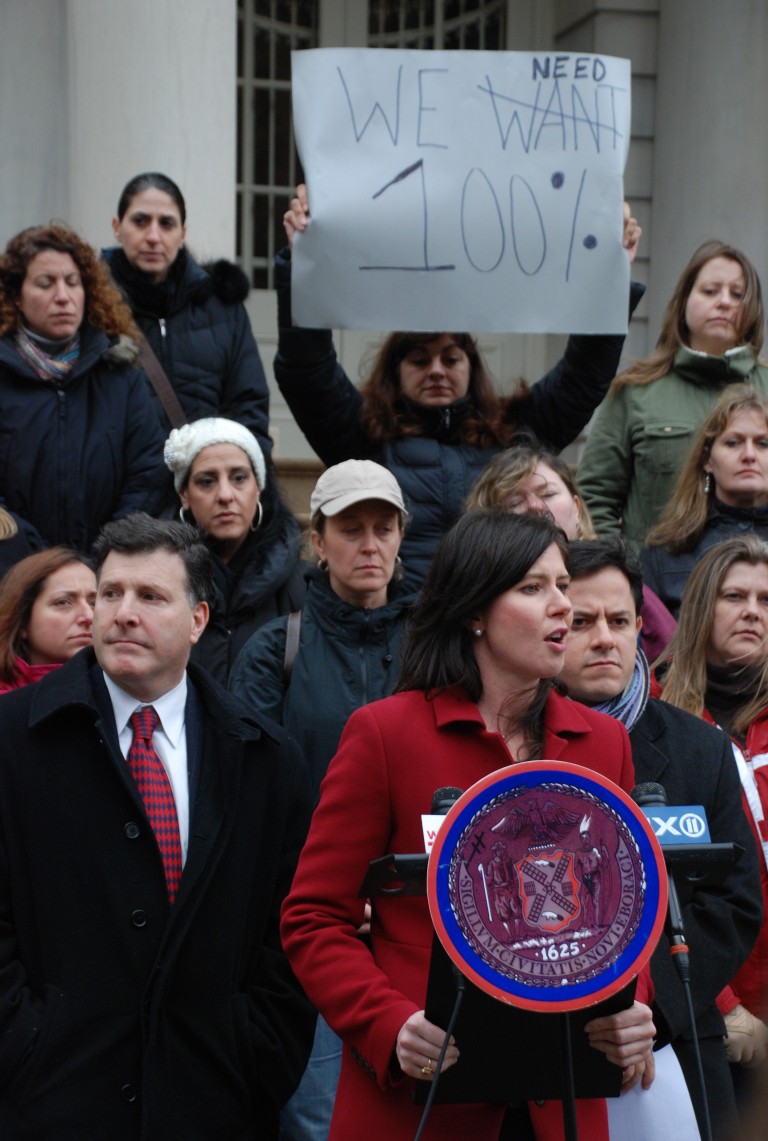 Crowley and others believe the new policy will entice principals to spend their surplus budget on supplies rather than let the DOE take money away.

“Our schools shouldn’t have to spend foolishly when we face serious debt,” Crowley said.

“If the Chancellor truly believes principals should be leaders in schools … then we should allow those leaders to make local decisions,” said Dromm, who was a teacher in District 24 for 25 years.

Parents at the press conference said the city was putting their children in the middle of a budget negotiation and jeopardizing their education.

“Our children’s education is not a bargaining tool,” parent Bonnie Pillar said.

Later that night CEC 24 held an emergency meeting where more than 300 teachers and parents filled the auditorium at P.S. 58 in Maspeth to protest the cuts. Several principals from the district spoke about how the cuts would impact their schools.

Principal John Lavelle of P.S. 128 said rollover funds are needed to bolster children’s education. “Bottom line, the money is given to each child in the school. That is their money,” Lavelle said to huge applause.

Other principals detailed how they have used rollover funds in previous years. P.S. 58 principal Adelina Tripoli said she was able to save a teaching position last year because of rollover funds.

“Money was intentionally saved so we could have good teachers in front of our students,” said Edward Santos, principal of I.S. 93.

Santos said his school had saved close to $300,000. His UFT representative and I.S. 93 teacher John Harrington said that 30 percent of those funds is $90,000—or the cost of two teaching positions.

Crowley also attended the meeting and blasted the Mayor for “creating fear” within the school community.

“Bloomberg is overreacting. He goes to one extreme to come to some compromise. In the DOE there’s so much waste, and it is not occurring in local schools,” Crowley said.

DOE representatives Robert Wilson and Bob Colasuonno defended the moves by the department.

Amid heckling and boos, Wilson said rolling funds over was never an automatic procedure, rather it was carefully reviewed each year. However, he did admit the manner the policy change was announced—in the Chancellor’s weekly e-mail to principals just before schools’ February break—could have been better. He also said, “Schools under the Bloomberg administration have received more money than ever.”

Discussing teacher layoffs, Wilson said the Mayor is fighting to repeal the Last In, First Out policy so principals would not have to deal with massive layoffs and would not have to scramble for rollover funds to save positions.

One disgusted parent yelled out that the DOE’s excuses were “embarrassing.”

CEC 24 President Nick Comaianni told parents that this is why they should always fight against mayoral control of schools.

“We don’t live in a communist state. Let us make the decisions for our kids,” Comaianni said.

Comaianni and the CEC 24 board unanimously voted to pass a resolution strongly condemning any policy that would take individual schools’ rollover funds.