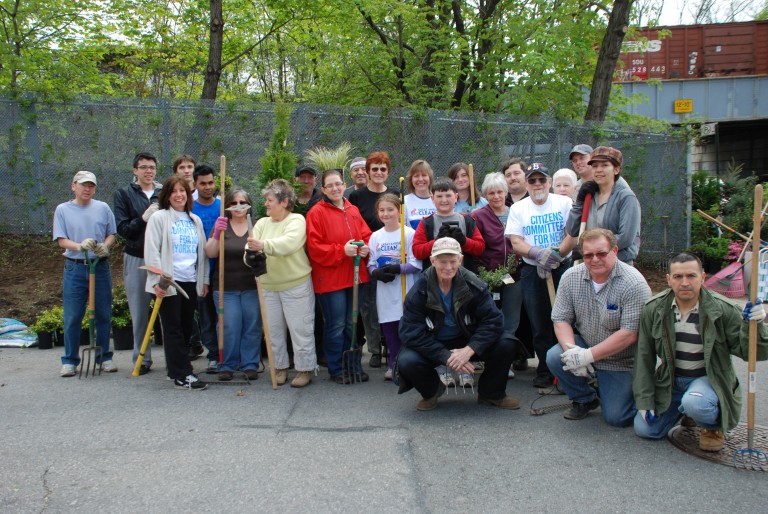 Over the weekend, several community groups around the area took charge and helped improve their neighborhoods. The Woodhaven Residents’ Block Association (WRBA) cleaned up graffiti around Woodhaven; the Juniper Park Civic Association (JPCA) painted the railroad overpasses on Eliot and Caldwell avenues in Middle Village; Civics United for Railroad Environmental Solutions (CURES) and the Farmers Oval Civic teamed up to plant trees along Shaler Avenue in Glendale.

These are the types of events that help bring communities together and show the true spirit of community activism.

If you ask the civic leaders, they say it’s important to show pride in the neighborhood and keep it clean. If dirty areas are kept dirty, “the blight tends to spread,” Bob Holden, president of the JPCA said. CURES Co-Chair Mary Parisen has said beautifying Shaler Avenue will help keep residents interested in the area and keep it clean; Councilman Eric Ulrich (R-Ozone Park) and a group of community volunteers cleaned Bayside Cemetery.

Often, community activists are caricatured as shouters ranting about complaints with no solutions. They’re wrong. Just last week, thanks to the efforts of the JPCA, Elmhurst Park opened, giving residents in the area much-needed green space.

These activists are unpaid volunteers, and they donate their time and attend these meetings because they truly care about making their neighborhoods the best they can be. What else do they have to gain? Sometimes they need to shout to be heard, but for the majority of the time, these residents thanklessly and quietly improve their communities.

In fact, the neighborhoods’ overall apathy and cynicism is what hurts these groups. Ed Wendell, president of the WRBA, recalled that as he was painting over graffiti, a neighbor told him it wasn’t worth it. Vandals would just come through and ruin his hard work.

Wendell knew that it was a likely scenario, but he still takes pride in his work.

“We can clean these mailboxes and walk away with our heads held high. The vandals, they have to run away,” he said.

It’s this type of dedication to a neighborhood that helps keep its character, and The Forum applauds civic leaders and members who dedicate their off time—we just wish there were more.